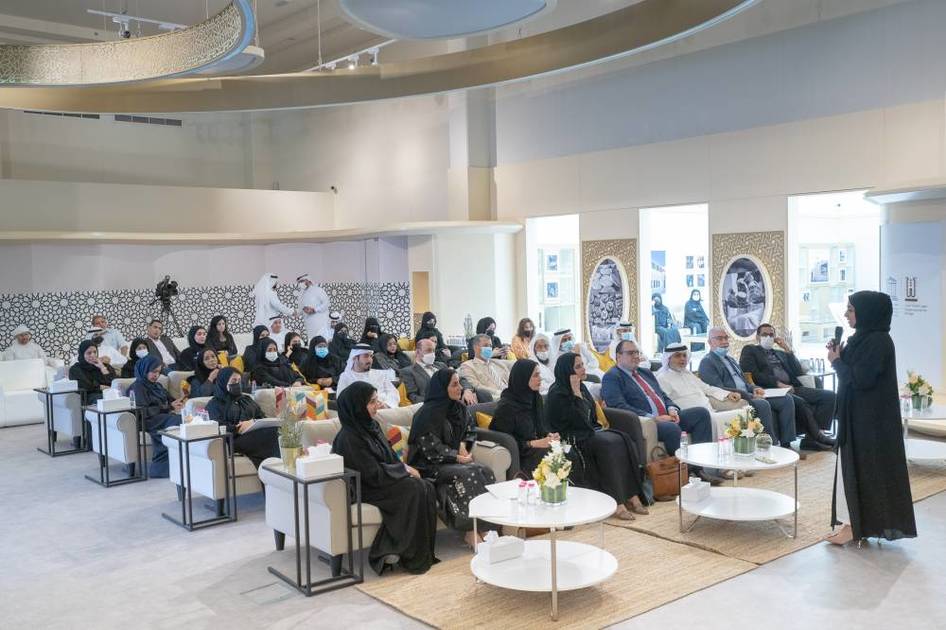 The Arab Cultural Heritage Center of the Sharjah Institute for Heritage hosted at its headquarters on Thursday a symposium on the occasion of “World Archives Day”, which falls on the ninth of June every year. A number of authorities, experts and specialists in the world of archives.
The symposium was divided into several axes, where Maryam Juma Al-Mansoori, head of the archives department at the Sharjah Documentation and Archives Authority, spoke about the “Sharjah Archive”, and Dr. Husnia Muhammad Al-Ali, Adviser on Education Programs at The National Archives and Library, where she addressed in her paper “Individual and Institutional Responsibility in Preserving National Memory”, and researcher Fatima Saif bin Hariz, Director of Research and Studies at Hamdan bin Mohammed Center for Heritage Revival, and focused in her paper. on initiatives from the Hamdan bin Mohammed Center for Heritage Revival “My Document Initiative”.
The work on the symposium also included a hypothetical intervention from Dr. Muhannad Mubaideen, Director General of the Royal Jordanian Hashemite Documentation Center in Jordan, on the “Archive of Jordanian Institutions and Its Status”, while the second session of the symposium, after the break, dealt with a paper entitled “Al-Sarkal Family Archive”, by Nasser bin Ahmed Al-Sarkal. Dr. Taha Muhammad Nour, scientific supervisor of the documentation department at the Majid Collection Center for Culture and Heritage, discussed the center’s experiences regarding the development of international legalization of archive descriptions. The symposium also included a hypothetical intervention by Abdul Rahman Al-Sadhan, Deputy Secretary General of the King Abdulaziz Foundation. In Saudi Arabia, he discussed King Abdulaziz House’s efforts to archive historical documents.
To honor the participants
At the end of the symposium, Dr. Al-Musallam spoke and expressed his gratitude and appreciation for what they presented and for their overall efforts to protect and preserve the cultural heritage, preserve the sustainability of the cultural heritage and pass it on to future generations. He said: “The International Day of the Archives is an important station and a major address in the various subjects of archiving, its significance and necessity, and from here we are eager, with our abilities, expertise and experience, to translate this understanding into the archive. , and it does not come to us without cooperation, coordination and joint work with strategic partners who have competencies Experience is what qualifies us all to achieve the goal, as the approach to cooperation and coordination is firmly rooted in Sharjah. ”
He stressed the importance of archives and that they preserve the nation’s documents and preserve a lot of evidence that could become a source of history. He added: “At the Sharjah Institute for Heritage, we rely on audio, visual and written documents, as they are all important documents on which we rely in codifying and documenting cultural heritage and in preserving the sustainability of this heritage and pass it on to future generations. “
Sharjah archives
Work on the symposium, which carried important and notable titles, began with a presentation by Maryam Juma Al Mansouri, Head of the Sharjah Documentation and Archives Authority, on the Sharjah Archive, where she was known for her authority. , its origins, vision, mission and goals, and it touched on how to preserve the Sharjah Archive, its sources and locations, its presence, and the initiatives that support the Sharjah Archive, and explained the “Document Secretariat”, starting with collection and processing of documents and preparation of storage and retrieval halls, as it is the place that deals with the preservation and processing of documents for government agencies and individuals. I also talked about Sharjah Digital Archive.
Dr. Hosnia Muhammad Al-Ali, Consultant for Educational Programs – National Archives and Library, pointed out in his paper the individual and institutional responsibility of preserving national memory, given that the responsibility for preserving national memory rests with all, individuals and institutions, whether it is related to documented memory, the blog or memory Orality is, given its meaning, value and status, a national and moral duty.
Regarding the researcher Fatima Saif bin Hariz, director of the Research and Study Department at Hamdan bin Mohammed Center for Heritage Revival, she told about the center’s initiatives with a focus on “My Document Initiative” as a model and explained that the initiative i.a. a general call on sources, institutions and individuals to contribute to the preservation of documents and collectibles. The history they have, by handing it over to the Hamdan Bin Mohammed Heritage Revival Center to preserve it from damage and loss and archiving it in an organized and secure scientific and technical manner, and to deliver it. It also addressed the importance of the initiative, its practical and scientific value and its objectives.
The symposium included a hypothetical intervention on the archive of Jordanian institutions and its status, in which Dr. Muhannad Mubaideen, Director General of the Royal Jordanian Hashemite Documentation Center in Jordan, explained how the filing process takes place in official institutions in Jordan, what has been done, and future plans that help emphasize the importance of archiving status and value today and in morning.
Nasser bin Ahmed Al Serkal, President of the Al Serkal Cultural Foundation, spoke to the Al Serkal Family Archive and explained the foundation’s role and efforts in various creative, cultural heritage and artistic fields as it works to spread the emirate spirit through the development and promotion of heritage and manages the most dynamic cultural space in the Al Fahidi Historical District.
In addition, at the 2007 annual conference, UNESCO and the World Archives launched an initiative to make June 9th a World Archives Day, the same date that the World Archives Council was established in 1948.