Deliveries that are part of the COVAX initiative that aims to bring vaccines to 92 lower- and middle-income countries around the world began today, in Ghana, as this plane touched down at Kotoka International Airport in Accra this morning. (Francis Kokoroko/UNICEF via AP)

Ghana today became the first country in the world to receive doses of COVID-19 vaccines from COVAX — the international coalition led by the World Health Organization and G-7 countries, including Canada.

Some 600,000 doses of the AstraZeneca vaccine, delivered by UNICEF and made by the Serum Institute of India, arrived at Kotoka International Airport in Accra this morning.

They are part of the first wave of the COVAX initiative that aims to deliver two billion doses to 92 lower- and middle-income countries by the end of this year.

However, like many countries, the inititative is grappling with logistical and supply problems and currently has legally binding agreements only for several hundred million shots. 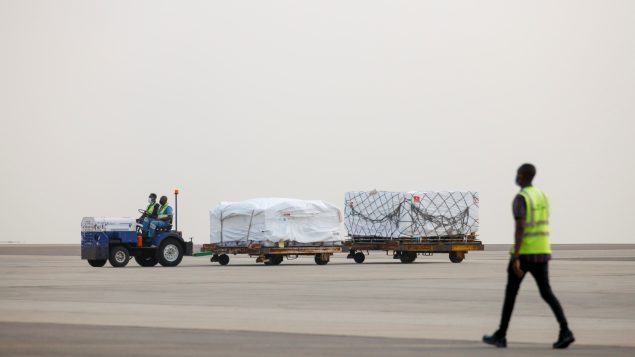 Workers drive with boxes of AstraZeneca vaccines, part of the 600,000 doses delivered in Ghana this morning. (REUTERS/Francis Kokoroko)

“Today marks the historic moment for which we have been planning and working so hard. With the first shipment of doses, we can make good on the promise of the COVAX facility to ensure people from less wealthy countries are not left behind in the race for life-saving vaccines,” said Henrietta Fore, executive director of UNICEF.

Ghana, which has a population of 30 million and has recorded 81,245 cases and 584 deaths since the beginning of the pandemic, plans to begin vaccinations on March 2.

Neighboring Ivory Coast–the next country scheduled to receive the vaccine–also plans to begin rolling them out next week. 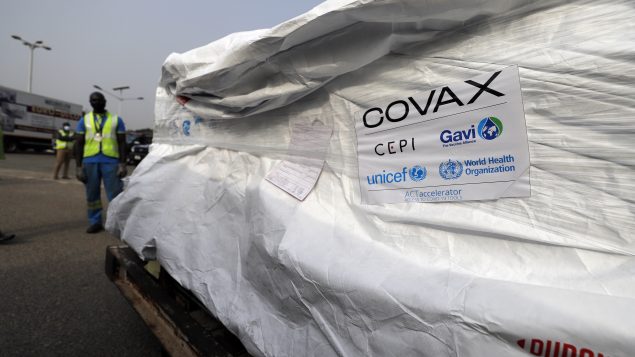 Ghana, which has a population of 30 million, has recorded 81,245 COVID-19 cases and 584 deaths since the beginning of the pandemic. It plans to begin vaccinations on March 2. (Francis Kokoroko/UNICEF via AP)

Canada bought into COVAX with $440 million in September, half of which secured doses for Canadians, and the other half to help buy doses for the 92 countries.

Canada is currently scheduled to receive 1.9 million doses of the AstraZeneca vaccine — pending regulatory approval — from the program by the end of June, according to an update released by COVAX on Feb. 3

But drawing on the COVAX supply has has caused a backlash as well as consternation and criticism.

Federal opposition leaders–as well as other Canadians–say it’s an embarrassment, noting that Canada is the only G7 country set to draw from COVAX’s vaccine supply in the program’s first allotment. 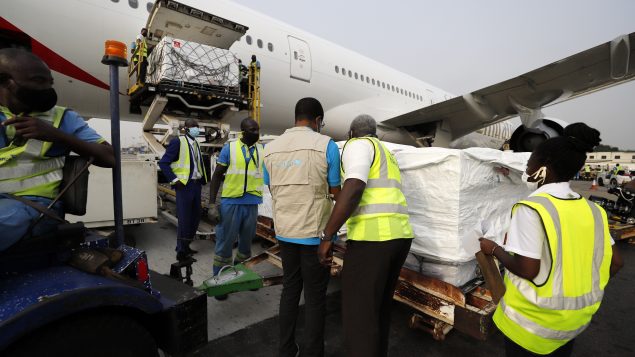 The vaccines, made by the Serum Institute of India, are delivered by UNICEF. (Francis Kokoroko/UNICEF via AP)

“We are asking for the government to either rescind this decision, or alternatively make up for whatever doses it has taken out by returning them to the COVAX facility so that our international neighbours can enjoy the same protection we do.”

With files from CBC News, The Canadian Press, The Associated Press, Reuters,