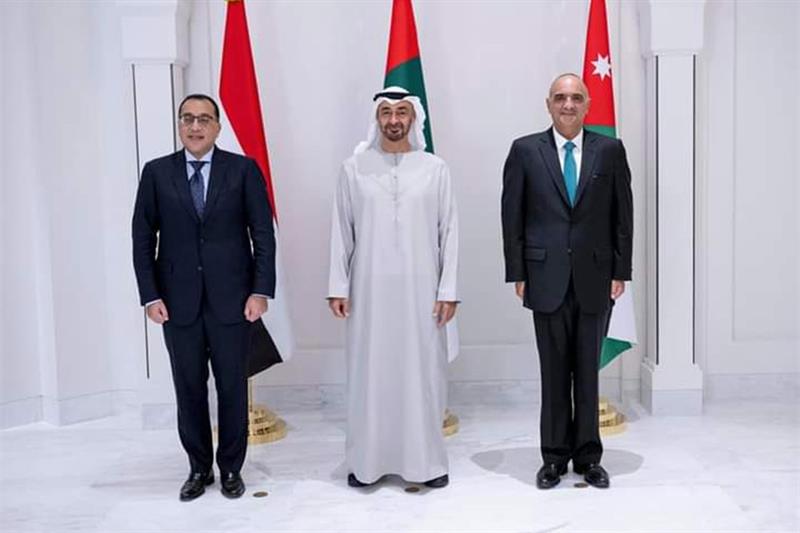 The fund will be run by Abu Dhabi Development Holding (ADQ) to support and accelerate the projects arising from the initiative, according to Emirati Minister of Industry and Advanced Technology Sultan Ahmed Al-Jaber, who made the announcement during the launch of the tripartite partnership.

Earlier on Sunday, Egypt, the UAE, and Jordan launched a joint initiative of integrated industrial partnership for sustainable economic development in the Emirati capital of Abu Dhabi.

The initiative focuses on several strategic sectors, most importantly pharmaceuticals, agriculture, food, petrochemicals, metals, minerals, and textiles with the aim of achieving economic sustainable development and contribute to supporting industrial integration between the three Arab nations.

The partnership aims to achieve self-sufficiency in the three countries and ensure food and health security, he noted, expecting that it will provide industrial opportunities with added economic value estimated at billions of dollars in the near future.

The combined GDP of Egypt, the UAE, and Jordan is approximately $800 billion, the minister said, adding that the three countries are rich in different resources that can be promoted through this new partnership.

Furthermore, he indicated that the three countries enjoy a wealth of human resources amounting to 60 million youths; the world-class advanced infrastructure of the Suez Canal in Egypt, through which about 13 percent of the world’s trade passes; and a number of the largest commercial ports, such as Jebel Ali Port, Khalifa Port, and Aqaba Port.

They also possess key resources of oil, gas, renewable energies, and minerals such as gold in Egypt and phosphates in Jordan, in addition to ultra-modern capabilities in the food, pharmaceutical, fertiliser, and textile industries.

It is also worth noting that Al-Jaber indicated that this partnership opens the door to increasing the production of wheat and corn in the three countries to about 30 million tonnes annually, up from the current 16.5 million tonnes.

Additionally, he explained that the minerals within the trinity — notably aluminium, iron, silica, and potash — can be utilised in projects worth $23 billion to manufacture high-value products such as glass, electrical wires, car components, and solar panels.

As for the petrochemical industry, he said that the sector’s contribution to the aforementioned combined GDP added up to about $16 billion in 2019, suggesting that new opportunities brought about by this partnership can foster growth in this sector and other related industries to over $21 billion.

Ahead of the launch event, a document outlining the sectors of cooperation between the three nations was inked by Egyptian Minister of Trade and Industry Nevine Gamea, Jordanian Minister of Industry Trade and Supply Yousef Al-Shamali, and Al-Jaber.

For his part, PM Madbouly thanked the UAE’s president for his decision to establish the ADQ’s $10-billion-fund to implement the initiative’s projects.

He also called for expediting the implementation of the initiative’s projects according to the specified due dates, according to a statement by the Egyptian Cabinet that was issued following the event.

Such a step, Madbouly noted, will promote integration and interdependence among Arab countries, representing an “inspiring” example for how to optimally allocate resources to create opportunities amid the current unfavourable economic and geopolitical conditions.

He added that this measure seeks to achieve economic integration between Arab countries, which was a goal that the founding fathers of the League of Arab States have aspired to since the 1940s.