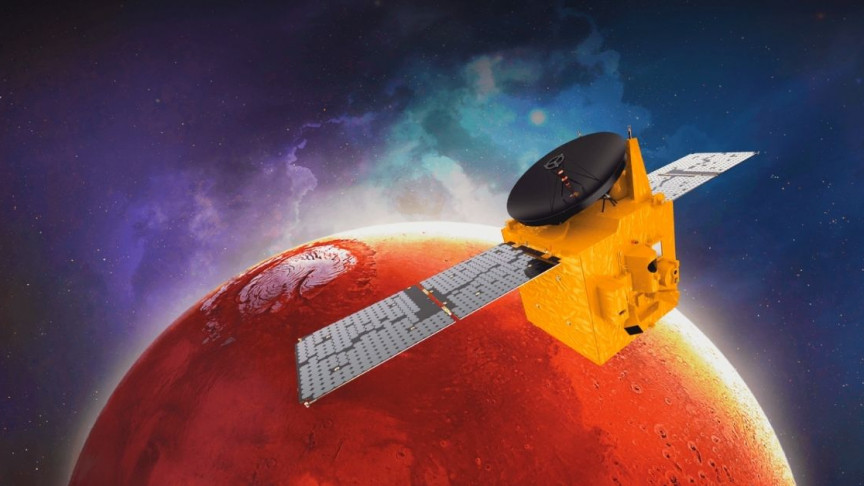 The United Arab Emirates’ (UAE’s) first interplanetary mission entered into orbit on Tuesday — after an anxious 27-minute wait, according to the official website of the country’s Hope Mars Mission.

Also called Al Amal, the “Hope” probe performed a deceleration burn for 27 minutes to enter orbit around the Red Planet — from 75,000 mph to 11,000 mph (121,000 km/h to 18,000 km/h). While this slow-down happened, personnel on the ground waited with nail-biting anticipation of the results.

“This has been a remarkable journey of humanity,” said Sarah Al Amiri, the UAE Space Agency chairperson amid preparations for orbital insertion, according to a Space.com report.

With a new probe in Martian orbit, the UAE is fifth to the Red Planet — after NASA, the Soviet Union, the European Space Agency (ESA), and India. The UAE’s Hope probe is especially noteworthy because, in the history of uncrewed missions to Mars, only roughly half arrive without catastrophic failure.

If it had failed, the UAE would have lost a probe worth $200 million.

As of writing, the UAE’s Hope probe has achieved a temporary orbit — in which it will remain for several more months while all onboard instruments are powered on. Once ready, mission controllers will move the spacecraft into a new orbit for scientific experiments this May.

Hope’s science orbit will see the spacecraft complete one orbit every 55 hours — enabling the craft to study atmospheric patterns on the Red Planet on a large scale.

Once the “Hope” probe has entered its science orbit, UAE mission controllers expect it to last for an entire Martian year — which is 687 Earth days).

During its one-Martian-year mission, the “Hope” probe will use three instruments to analyze weather near the Red Planet’s surface — with an emphasis on how various layers of its atmosphere interact and connect.

Consensus holds that Mars used to have a full atmosphere capable of supporting watery oceans on its surface. With the knowledge provided by the Hope probe, scientists can learn more about how Mars continually loses atmosphere to space.

UAE also aims to send astronauts to moon and Mars

For example, the UAE mission could unveil the role dust storms on the surface of the Red Planet play in exacerbate atmospheric loss — in addition to how disparate weather systems spread across Mars interact.

The UAE’s Hope probe launched more than a decade ago — on the heels of the nation’s first satellite in Earth orbit: DubaiSat 1. Since then, the country has taken an interest in developing its science and technology capabilities to prepare itself for potential economic storms — since the UAE’s economy relies mainly on fossil fuels.

In the future, the UAE also plans to recruit and send astronauts into space — intending to launch and land a spacecraft on the moon in 2024. The country also plans to one day put humans on Mars, in a mission called Mars 2117 — which will involve both Earth-bound and interplanetary benchmarks, as the budding space power ramps up deep-space capabilities.

This was a breaking story and was regularly updated as new information became available.