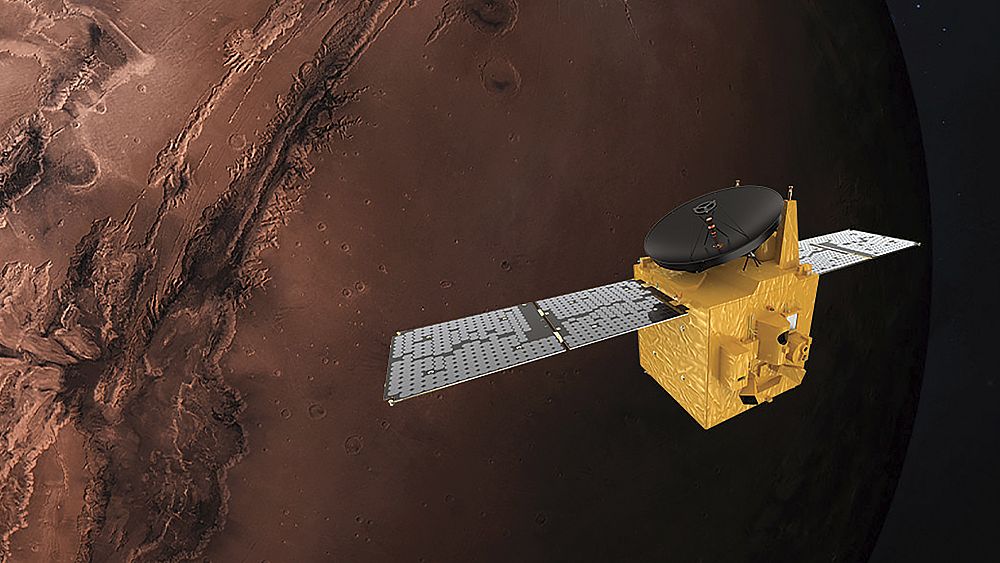 A spacecraft from the United Arab Emirates was set to swing into orbit around Mars in the Arab world’s first interplanetary mission on Tuesday.

It is the first of three robotic explorers that are scheduled to arrive at the red planet over the next week and a half.

The orbiter, called Amal, Arabic for Hope, travelled 482 million km in nearly seven months to get to Mars with the goal of mapping its atmosphere throughout each season.

A combination orbiter and lander from China is close behind, scheduled to reach the planet on Wednesday.

It will circle Mars until the rover separates and attempts to land on the surface in May to look for signs of ancient life.

A rover from the US named Perseverance is set to join the crowd next week, aiming for a landing Feb. 18.

It will be the first leg in a decade-long US-European project to bring Mars rocks back to Earth to be examined for evidence the planet once harboured microscopic life.

About 60% of all Mars missions have ended in failure, crashing, burning up or otherwise falling short in a testament to the complexity of interplanetary travel and the difficulty of making a descent through Mars’ thin atmosphere.

For the UAE, it was the country’s first venture beyond Earth’s orbit, making the flight a matter of intense national pride.

For days, landmarks across the UAE, including Burj Khalifa, the tallest tower on Earth, glowed red to mark Amal’s anticipated arrival. This year is the 50th anniversary of the country’s founding, casting even more attention on Amal.

The celestial weather station aimed for an exceptionally high Martian orbit of 22,000 kilometres by 44,000 kilometres. It was set to join six spacecraft already operating around Mars: three US, two European and one Indian.

Amal was expected to perform an intricate, high-stakes series of turns and engine firings to manoeuvre into orbit and achieve what has eluded so many before.

“Anything that slightly goes wrong and you lose the spacecraft,” said Sarah al-Amiri, minister of state for advanced technology and the chair of the UAE’s space agency.

Success would be a tremendous boost to the UAE’s space ambitions. The country’s first astronaut rocketed into space in 2019, hitching a ride to the International Space Station with the Russians. That’s 58 years after the Soviet Union and the US launched astronauts.

In developing Amal, the UAE chose to collaborate with more experienced partners instead of going it alone or buying the spacecraft elsewhere. Its engineers and scientists worked with researchers at the University of Colorado, the University of California at Berkeley and Arizona State University.

The spacecraft was assembled at Boulder, Colorado, before being sent to Japan for launch last July.

All three spacecraft en route to the red planet lifted off within days of one another, taking advantage of the close alignment of Earth and Mars — thus their close arrival times.