UAE Probe Captures Aurora Surrounding The Night Side of Mars 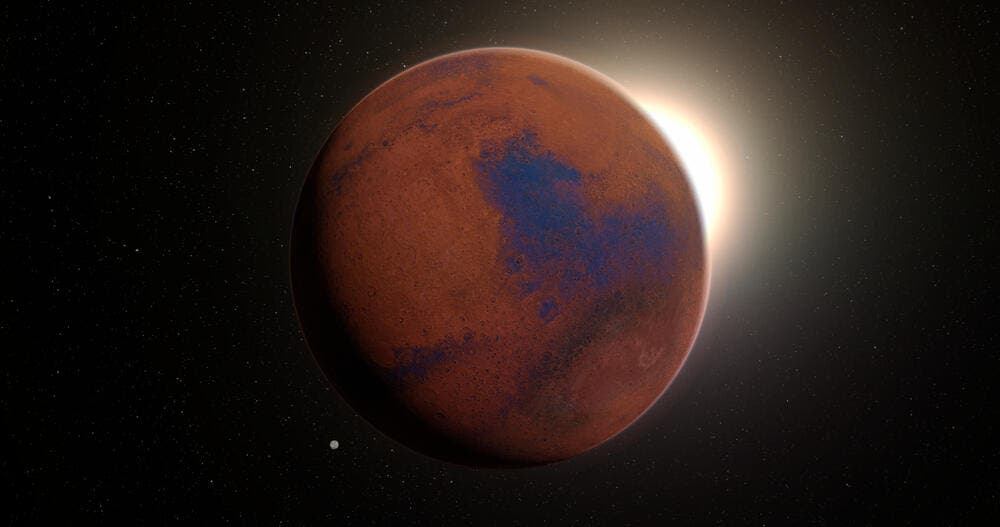 Aurora surrounding the night side of Mars have been photographed by the United Arab Emirates Hope probe, currently in orbit around the Red Planet.

The Emirates Mars Mission, the first interplanetary exploration undertaken by an Arab nation, arrived in orbit around the Red Planet in February this year.

The probe is the first to photograph the ‘discrete aurora’ caused by solar radiation hitting the nightside of the atmosphere and only visible in ultraviolet light.

They have revolutionary implications for our understanding of interactions between solar radiation, Mars’ magnetic fields and the planetary atmosphere, the team said.

Mars has three types of aurorae – proton, diffuse and discrete – but none are visible to the naked eye, only in various forms of ultraviolet light, requiring a special camera.

Until these new images by the Hope probe, only the proton aurora, which occurs during the day, had been captured by ultraviolet cameras on NASA spacecraft.

The images, taken by the probe’s EMUS (Emirates Mars Ultraviolet Spectrometer), show a ghostly glow surround the planet known as the ‘discrete aurora’.

‘These global snapshots of the discrete aurora are the first time such detailed and clear observations have been made globally, as well as across previously unobservable wavelengths,’ said Hessa Al Matroushi, mission science lead.

‘The implications for our understanding of Mars’ atmospheric and magnetospheric science are tremendous and provide new support to the theory that solar storms are not necessary to drive Mars’ aurora,’ Matroushi added.

The intricate patterns of this aurora trace out the regions where Mars’ enigmatic crustal magnetic fields act like a funnel.

They guide fast electrons from space down into the atmosphere, causing it to shimmer in a manner similar to Earth’s aurora.

This influence of localised magnetic fields is a unique feature of the Red Planet as Mars, unlike Earth, does not have a global magnetic field generated by the core.

EMUS is the most sensitive ultraviolet instrument ever sent to Mars and can image these dynamic auroral events globally at a very high resolution.

They can also capture images of them across a wide range of wavelengths, providing a window into the interaction of the atmosphere with solar particles.

While previous studies had theorised the discrete aurora is tied to Mars’ magnetic fields and existing observations had been consistent with that theory, prior images of this phenomenon at this quality had only been available as artist’s impressions.

‘The data we are capturing confirms the tremendous potential we now have of exploring Mars’ aurora and the interactions between Mars’ magnetic fields, atmosphere and solar particles with a coverage and sensitivity we could only previously dream of.

‘These exciting observations go above and beyond the original science goals of the Emirates Mars Mission.’

One of three instruments on board the Mars Hope Probe, EMUS’ principal science goal is the measurement of oxygen and carbon monoxide in Mars’ thermosphere.

It is also tasked with measuring the variability of hydrogen and oxygen in the exosphere – the outer most layer of the thin Martian atmosphere.

Members of the science team who had previously worked on the NASA MAVEN Mission had recognised the potential for the more sensitive EMUS instrument to capture new aspects of Mars’ auroral phenomena.

The results of early observations have exceeded their wildest expectations, according to the Hope probe mission team.

Three types of aurora have been observed around Mars to date by various NASA missions – diffuse, discrete and proton.

The diffuse aurora is only seen when there is an intense solar storm, with highest energy particles causing the entire martian atmosphere to ‘light up’ in UV light.

In contrast, the discrete aurora is highly localised and observations made to date have appeared to bear out the theory that it is directly linked to the patchy magnetic fields produced by magnetised minerals embedded in Mars’ surface.

Both of these aurorae are observed on Mars’ nightside, while a third class, the proton aurora, has been measured on Mars’ dayside and is driven by interactions between the solar wind and Hydrogen in Mars’ exosphere.

These three types of aurora had previously been identified by ultraviolet instruments aboard the Mars Express and MAVEN missions orbiting Mars, but clear global images of the discrete aurora were elusive until the new observations by Hope.

‘Mars’ aurorae are an area of intense interest to the global scientific community and their study has tremendous potential to challenge, expand and deepen our understanding of Mars’ atmosphere and its interaction with the planet and with solar energies,’ said Matroushi.

‘We were hopeful that EMUS could make a contribution in this area but we now know with absolute certainty that contribution is going to be ground breaking.’

Hope is following an orbit between 12,000 miles and 27,000 mile elliptical science orbit around the Red Planet, completing an orbit every 55 hours and capturing a full planetary data sample every nine days of its two year mission.

In addition, it will now aim to make significant contributions to our understanding of Mars’ aurorae.