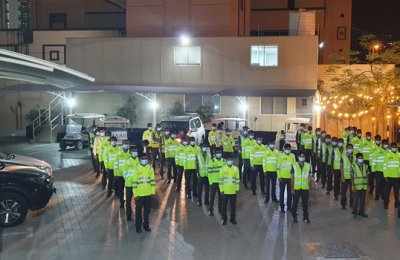 Following New Year’s eve celebrations that captivated attendees and spectators from around the world, facilities management services provider Emrill was on-site to complete cleaning activities in Emaar’s flagship community, Downtown Dubai.  Despite heavy rain and attendance that surpassed that of the previous year’s event, Emrill cleaned the surrounding areas of Downtown Dubai, including Sheikh Mohammed bin Rashed Boulevard and Burj Park, returning the site to its original state and opening it to the public again by 2.30 am on January 1, 2022. Preparation for the event began months in advance to ensure robust precautions were in place to guarantee the safety of residents and visitors.  Ahead of the world-famous fireworks and laser display, Emrill sanitised the entire surrounding area on December 30, 2021. Working closely with the event organisation team, Emrill used crowd movement forecasts to map routes to and from designated viewing and seated areas. Unlike the 2020 celebrations, heavy rainfall on December 31 made it necessary for Emrill’s teams to carry out further sanitisation activities and remedial works to ensure the area was ready to receive guests.  Additional actions were carried out seamlessly as they had been accounted for in the contingency plans the total facilities