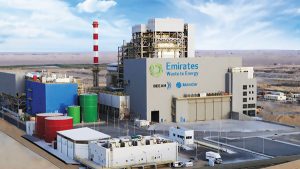 The UAE began a new era of clean energy production and climate neutrality by producing the first kilowatt (KW) of energy from waste, through the inauguration of the Sharjah Waste-to-Energy Plant.
The plant, the first of its kind in the region, will help turn nearly 300,000 tonnes of waste into energy annually, producing 30 megawatts of low-carbon electricity, enough to power nearly 28,000 homes in the UAE.
The project will also help prevent the emission of up to 450,000 tonnes of carbon dioxide annually, supporting the country’s efforts to realise its strategic initiative to achieve climate neutrality by 2050.
The project will support the UAE’s efforts to turn waste into an economic resource, by developing and establishing several waste-to-energy facilities, in line with the circular economy approach.
The country is continuing to develop waste-to-energy plants, including the Dubai Waste Treatment Centre in Warsan.
The project, costing some AED4 billion, will be completed in line with international environmental standards, with a capacity of some 1,000 loaded trucks per day, treating 5,666 tonnes of municipal solid waste produced by the emirate daily.
It will also convert some 1.9 million tonnes of waste annually into renewable energy, which will provide the local electricity network with some 200 MW of clean energy.
The Abu Dhabi Department of Energy and Tadweer signed an MoU to turn some 5.1 million tonnes of municipal waste into energy in Abu Dhabi and Al Ain.
In January 2021, an application process was opened to bidders to establish the first plant with an independent production system capable of handling waste weighing between 600,000 and 900,000 tonnes.
The plant will help prevent nearly 1.5 million tonnes of carbon emissions.
In Umm Al Qaiwain, the construction of a solid waste treatment plant project and the production of alternative fuels are continuing, at a total cost of some AED132 million.
Federal Law No.12 for 2018 concerning integrated waste management, the first of its kind at the federal level, aims to encourage the establishment of recycling facilities, as well as the recovery of the maximum amount of recyclable waste and, in certain cases, the facilities required to reuse certain types of waste generated from their activities.
In the following year, the Ministry of Climate Change and Environment issued two resolutions. The first is aimed at using refuse-derived fuel (RDF) in cement factories, and the second is aimed at using construction waste in infrastructure and road projects.