The United Arab Emirates and Qatar have increased their attractiveness to foreign investors over the past year, according the 2022 Foreign Direct Investment Confidence Index by global strategy and management consultancy Kearney.

Now in its 24th edition, the annual report by Kearney sheds light on some of the main developments in the foreign direct investment space, and showcases the countries best positioned to attract the most investment in the next three years.

Foreign direct investment (FDI) is one of the key drivers of economic growth, in particular for open economies, not only promoting direct growth (job creation) but also indirectly through local spending increases and the influx of intellectual and technological capital, among others. 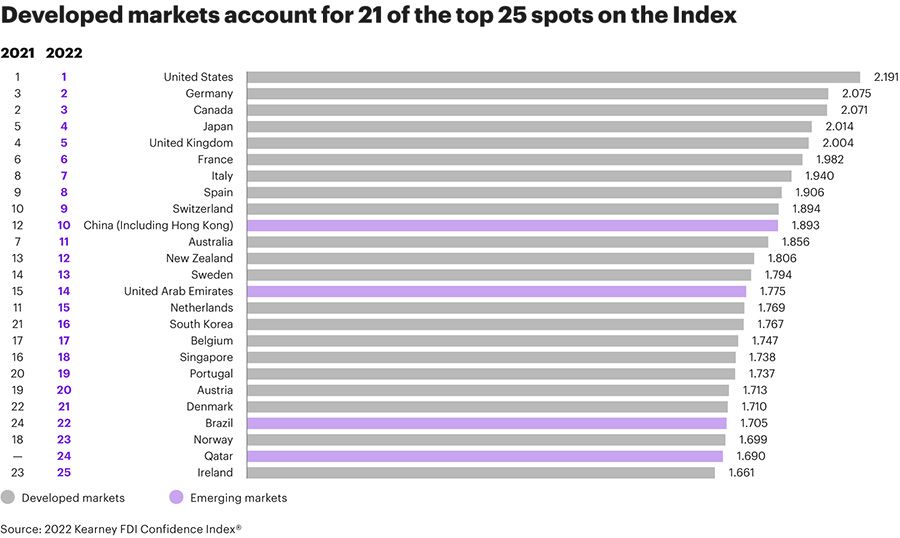 With 14 economies in the top 25 of Kearney’s FDI Confidence Index, Europe retains its position as the most attractive continent across the board, with Germany ranking 2nd, the United Kingdom 5th, followed by France, Italy, Spain, and Switzerland. Sweden, the Netherlands and Belgium are the next highest ranked European countries.

However, the United States remains the world’s top destination – as it has been for the past ten years in the study. In 2021, the US deepened its receipts of inward FDI by more than 114% in a single year said the US authorities, reporting a total of $323 billion.

Overall, the composition of Kearney’s FDI Confidence Index is largely unchanged from last year, with one exception: Qatar makes the list for the first time since the Index was founded in 1998, displacing Finland from the top 25.

The UAE though is the Middle East’s top hotspot for foreign capital inflows, improving its ranking from 15th last year to 14th this year.

According to Rudolph Lohmeyer, Partner and Head of Kearney’s National Transformations Institute, the UAE’s steady rise in the rankings in the past years [in 2017 the UAE ranked 21st) speaks to the power of consistency and momentum. The success of the Expo coupled with the UAE’s continued investment in advanced technological infrastructure has diversified the economy, making the country more attractive for investors.”

Meanwhile, a strong containment of the Covid-19 pandemic has meant that the UAE was a bright spot for international tourism in 2021 and the first half of 2022, which contributed to a quicker economic rebound vis a vis many other emerging markets.

“Central to the country’s attractiveness as a business and financial hub are plans to deepen trade ties in fast-growing economies in Asia and Africa with the aim to invite $150 billion in foreign investment,” said Lohmeyer.

According to the Ministry of Economy in the UAE, foreign direct investment inflows to the UAE recorded a 3.9% growth in 2021 to reach nearly AED 76 billion ($20.7 billion). Over the next three years, Kearney’s researchers project a strong average growth of 5.4%, bolstered by institutional reforms to promote trade and investment and improve the ease of doing business in the country.

Meanwhile, a recent report by Oliver Wyman in collaboration with the World Government Summit found that UAE governments could be more effective in their pursuit of foreign capital if they revisit their approach, with key recommendations including targeting more high-value-add sectors and investments that unlock more knock-on effects to the local economy.