The name Kunle Adeyanju is no stranger to both online conversations and mainstream news as the man has been inspiring many people with his charity ride.

When he revealed in April that he will be taking on the task of riding a power bike from London to Lagos state in weeks, many doubted him. It seemed like a joke.

Weeks after that announcement, his mission has been a big source of motivation to many who saw it as an avenue to unite people across countries and continents.

Nigerian man who’s been riding bike from London announces when he will get to Lagos state, many rejoice

To show how his journey has engendered relationship, the young man wrote about the hospitality Malians gave him when he lost his wheel.

The biker’s association in the country left whatsoever they must have been busy with and travelled for hours to get him a replacement.

As a token of their appreciation for him, they honouredhim with a presidential motorcade and had lunch with Kunle. He has since been hosted by many dignitaries on the continent.

Twitter recongised him as a public figure and gave him the verification badge which Legit.ng spotted on Friday, May 20.

Meanwhile, Legit.ng earlier reported that despite being closer to home, the Nigerian rider had an encounter in crossing a border into Cote d’Ivoire. 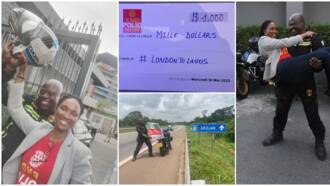 Nigerian man riding from UK to Lagos on bike gets N415k from pretty Ivorian lady, carries her, many react

In a post on Sunday, May 15, Kunle revealed that he was denied entry into the West African country. He, however, added that Nigerian embassies are working on the situation.

A photo he shared shows him posing amid other power bikes at the Cote d’Ivoire’s border. Nigerians thronged his comment section with various reactions.

To get land gift

In similar news, as he neared home after passing through Burkina Faso and Cote d’Ivoire in recent days, Kunle shared a post of a company promising him a land gift.

The real estate company said that when he gets to Nigeria, they would also organise a radio tour for him as the person who has set a record.