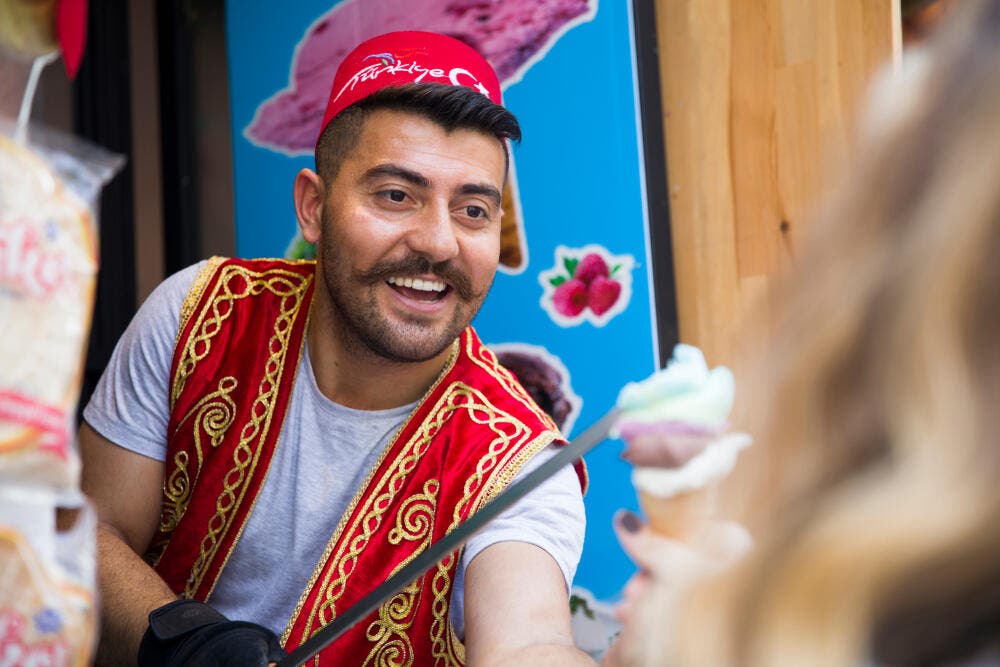 Famed for their amusing pranks with customers, Turkish ice cream vendors have found a way to stand out in Dubai’s lucrative frozen dessert market.

On a cold night in late January, a girl approached an ice cream seller on a promenade by the beach, surrounded by giggling friends as she tried her hardest to grab her ice cream cone from a crafty vendor. Not an easy feat by any means.

Her friend filmed her for several minutes, capturing her laughter and exasperation as she locked eyes with the ice cream seller, almost pleading with him to hand over the elusive cone. She got her wish in a couple of minutes and couldn’t resist as she gleefully asked her friends, “Did you get that? Did you click photos? Show me!”

Kuhn, Kogyeol and Bit-to getting Turkish Ice Cream (Maraş dondurma) at an amusement park and being fooled by the guy: my new favorite thing pic.twitter.com/DthTqpBEcC

Tucked away in a glitzy corner of Dubai, Jumeirah Beach Residences, also known as JBR, is a tourist hotspot with plenty of restaurants offering a plethora of cuisine options from different parts of the world. Also on offer are less glamorous, picturesque little stalls that are located close to the sea and dedicated to selling dondurma or maras dondurmasi: huge scoops of traditional Turkish ice cream in all its glory.

The experience comes equipped with pranks and free-flowing entertainment, only if you’re comfortable and up for a bit of fun. “I’m happy to be of service,” JC Alejandra, a 23-year-old Filipino ice cream seller, said, adding that he loves entertaining his guests who are often curious about his colourful pranks.

Speaking with TRT World, Alejandra first came to Dubai in 2018 in a bid to start a new life. He flirted with several gigs for a brief period before finding something that he loved doing: being a part of a small group of dondurma servers in the city, men who dedicate themselves to spreading a bit of joy and laughter through pranks and endearing tricks as they engage with their customers.

There are a few big names in the city that focus on introducing Dubai’s residents and tourists to dondurma such as Maras Turka and Mado Cafe. While the former has several stalls around the city, the latter’s most prominent location is inside the expansive Dubai Mall. There are also smaller, lesser-known names such as the company that Alejandra is a part of (name withheld on request) that are trying to explore uncharted territories and appeal to customers through the unique flavours of dondurma.

Dondurma’s stretchy texture and the fact that it refuses to melt makes it an appealing product in Dubai, where tourists often seek new and previously unexplored flavours for the sake of adventure and memorable stories. It helps that Dubai’s ice cream market is huge, and is expected to grow significantly over the next few years as consumers continue to seek refuge from the unforgiving desert heat during the harsh summer months.

Running a dondurma stall isn’t easy. It took Alejandra around three months to get comfortable with the art of selling dondurma. He trained as an assistant to a Turkish senior who taught him how to mix the ice cream perfectly and entertain customers at the same time.

“The ice cream is really [tricky to mix],” Alejandra explained. This sentiment was echoed by his colleague, Kamran Afzal, a 25-year-old vendor from Pakistan. Afzal told TRT World that he experimented with Turkish cuisine before he was introduced to dondurma, learning how to cook sweets like kunefe.

When Afzal decided to become a dondurma expert, he had to try tricks like role-playing with his senior colleague to get better at selling ice cream.

He’d promptly pretend to be a customer and observe his co-worker as he joked around with him and expertly mixed massive scoops of dondurma without batting an eyelid. Afzal refused to give up and practiced hard until he mastered it.

“I’m a fast learner,” Afzal said, laughing. What does he like the most about dondurma? The fact that it’s natural and made from ingredients like goat’s milk and orchids, meaning that it’s free of artificial flavours and additives. And the experience that comes with the territory, of course.

The pranks associated with selling dondurma first began several years ago in the Kahramanmaras region. The pranks are, of course, wildly popular in Istanbul; Dubai’s ice cream enthusiasts can’t help being charmed either.

Afzal loves interacting with his guests. “Every day is new here,” he said, smiling, referring to how he gets all kinds of customers, some super-excited to engage with him as he plays around with them before giving them their ice cream. There are also the irate customers who don’t want to wait around before digging into the sweet dessert.

Afzal recalled that some of his most memorable experiences have been with children. A few kids get so angry that they start stomping the ground in a huff, insisting that they want the ice cream immediately. They ask their parents, “Why is he not giving it to me?!”

It’s all light-hearted, of course. Afzal and Alejandra are mindful of observing their customers’ reactions and taking things from there. If they know that someone’s not in the headspace to participate in the tomfoolery, they go easy on them and hand over the cones without further ado. But most customers enjoy laughing a little as they try to outsmart the vendors while reaching out for their ice cream cones.

Things haven’t been easy, though. For ice creams vendors like Afzal and Alejandra, the pandemic has been filled with uncertainty and job losses. Alejandra lamented over the fact that he was left distraught for several months after his previous employer laid him off without severance pay.

“[It was very] difficult,” Alejandra said, recalling that he struggled to get by. He lost his income and visa, facing a period of extreme angst and uncertainty until he landed his current job.

“No one will support me for anything I need in a month,” he said matter-of-factly, adding that he does have his share of good moments. A few days ago, for example, a delighted family left him a huge tip for his services, enthralled by his charm.

“They enjoyed [themselves] with me…I was very happy.”