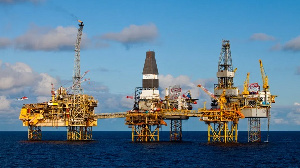 Oil and gas exploration in Ghana

The Institute for Energy Security (IES) in 2019 debunked claims by government that Ghana had discovered oil worth 550million barrels daily.

News from government agencies stated that Ghana had discovered a new oil field in the Cape Three Point area ready for exploration by Aker Energy.

The minority also revealed that the government supposed discovery is a hoax.

A press release issued by Adam Mutawakilu, Ranking Member for Mines and Energy Committee said the wells mentioned were old discoveries as far back as 2012/13 adding that the information was deliberately being put out to cover up huge losses Ghana had incurred as a result of government’s negligence since the victorious ITLOS ruling against Cote d’Ivoire.

Read the full story originally published on January 14, 2019 by myxyzonline

The Institute for Energy Security (IES) has rubbished claim there is a new discovery of oil worth 550 million barrels daily.

This follows news from government agencies that Ghana has discovered a new oil field in the Cape Three Point area ready for exploration by Aker Energy.

“Two things may have led into that announcement. It could be the usual politics or intention to steal,” Mikdad noted as he explained the oil exploration in the Deepwater Cape Three Points block – Pecan-4A field in Ghana was discovered around 2013.

Mr Mohammed said IES was putting its facts together on the issue and would soon address Ghanaians on it.

“We are gathering other facts and will come out soon on the issue,” disclosed Mr Mohammed.

His comments come after the Minority in Parliament described as misleading news suggesting that there had been a new discover of oil in the country.
Last week, Aker Energy announced that its oil exploration in the deepwater Cape Three Points block had been successful, adding the Pecan4A well in the block could be holding between 450 and 550 million barrels of oil.
Minority

A press release issued by Adam Mutawakilu, Ranking Member for Mines and Energy Committee yesterday said the wells mentioned are old discoveries as far back as 2012/13 and that, the information is deliberately being put out to cover up huge losses Ghana has incurred as a result of government’s negligence since the victorious ITLOS ruling against Cote D’Iviore.

Adam Mutawakilu said the Minority is extremely surprised by Minister of Energy’s attempt to deceive Ghanaians into believing that there is a new discovery of 550million barrels of oil by Aker Energy. When in actual fact, government’s actions and inactions have resulted in a loss of opportunity for the country to earn money.

The statement explained that as far back as 2006 the Government of Ghana signed a Petroleum Agreement with Hess Ghana (whose shares was taken over by Aker Energy in 2018) for the Exploration and Production of DWT/CTP Block which was subsequently ratified by Parliament that same year, with a shareholding structure of; Hess 90%, GNPC 10%.

It said the Pecan North discovery was in February 2013 aside Paradise and Hickory North which carried gas, the rest are oil discoveries.

The MP said it is evident that the Pecan discovery in 2012 under President Mahama’s Government is now being treated by the Nana Addo/Bawumia led Government as if it is a new discovery.

It is important to put on record that, what Aker Energy did since 2018 and after the ITLOS ruling, was drilling Appraisal wells based on Hess’s acquired data to determine the commercial nature of the discoveries that were made by Hess in 2012 and 2013.

The Minority is therefore calling on all well-meaning Ghanaians, especially on the Institute for Energy Security (IES), the Africa Center for Energy Policy (ACEP), the Natural Resource Governance institute, IMANI Africa and the other think-tanks, to assist Ghanaians in demanding accountability from Government, with respect to the subject matter in conclusion, the Minority demand of Government to explain to Ghanaians:

They are also asking why GNPC did not exercise the option to acquire the 10% share in Hess block. Why Aker Energy is not required to bring in a local partner as LUKOIL did when it acquire its shares in the Hess Block and the where about of the US$47million approved by Parliament and subsequently transferred to GNPC.