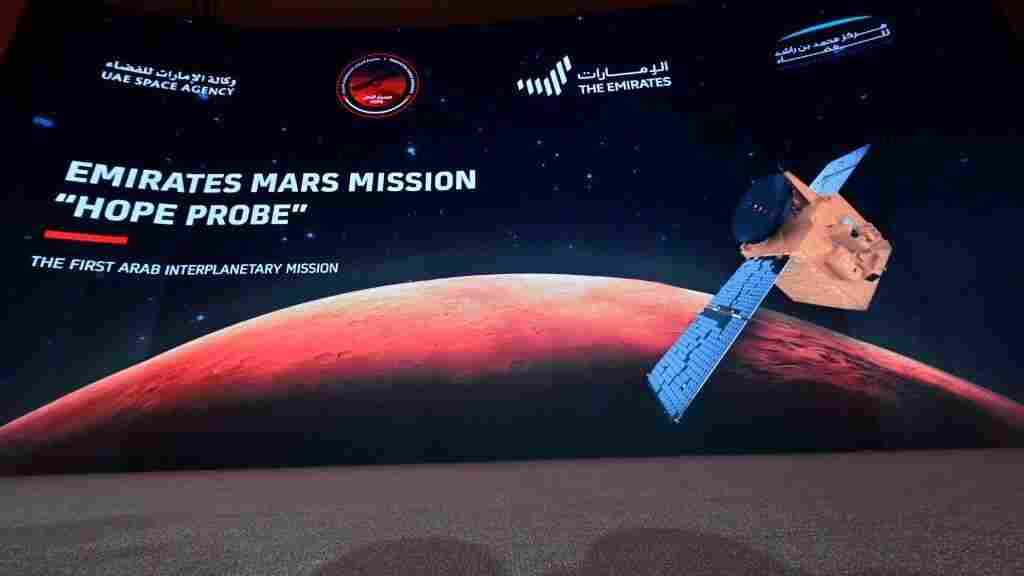 A picture taken on July 19, 2020, shows a screen broadcasting the launch of the “Hope” Mars probe at the Mohammed Bin Rashid Space Centre in Dubai. “Hope” — Al-Amal in Arabic — is expected to start orbiting Mars this week, marking the 50th anniversary of the unification of the UAE. GIUSEPPE CACACE/AFP via Getty Images hide caption 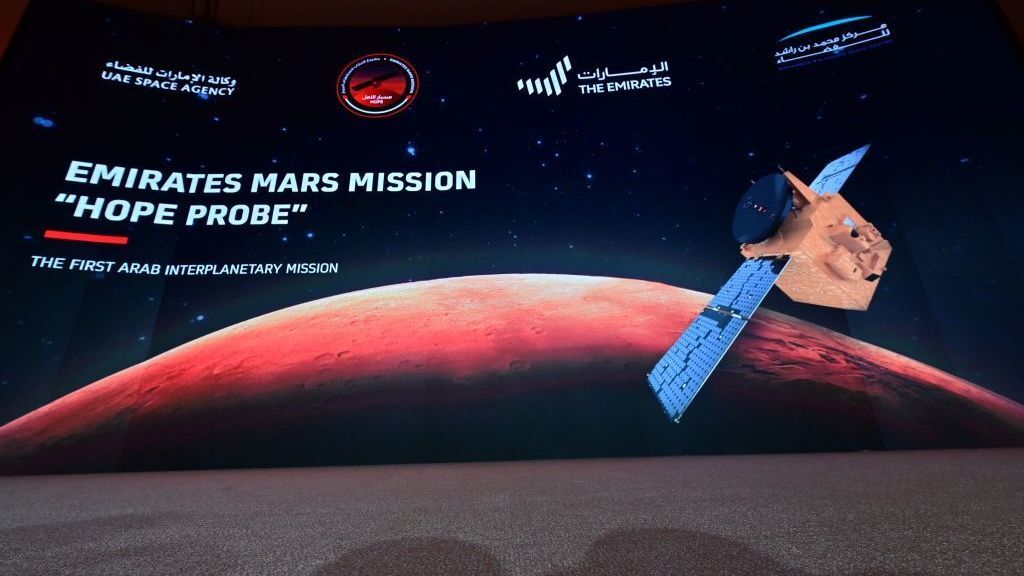 A picture taken on July 19, 2020, shows a screen broadcasting the launch of the “Hope” Mars probe at the Mohammed Bin Rashid Space Centre in Dubai. “Hope” — Al-Amal in Arabic — is expected to start orbiting Mars this week, marking the 50th anniversary of the unification of the UAE.

It’s taken seven months, and more than 300 million miles to get there, but Hope is on track to arrive at Mars tomorrow.

It’s the first ever interplanetary mission from the United Arab Emirates and “Hope” is the name of the SUV-sized spacecraft that is scheduled to orbit Mars and study the Martian atmosphere.

He was also feeling confident. Everything has been going extremely well with the mission. The probe left Earth in July of 2020, and with a few mid-course tweaks, Hope is on the right course to orbit Mars.

But deep space missions, especially the ones headed for Mars, can go from fine to failure in less time than it takes you to say, “Houston, we have a problem.”

“Everything rests on a single moment,” says Sarah Al Amiri, Minister of State for Advanced Sciences and chair of the UAE space agency. “Is launch successful? OK, you’re up in the air. Is the first stage separating? OK, it’s separated. Second stage separating? You go on an emotional roller coaster during a short amount of time.”

The next ride on the rollercoaster comes at 10:30 Eastern Time Tuesday morning Eastern Time, February 9 (Tuesday night in Dubai). Hope’s engines are to fire for 27 minutes so the spacecraft can be captured by Mars’ gravity and go into orbit. If they don’t fire, Hope just zooms on by.

If everything does go as planned, Hope will have an opportunity to collect some unique data. Most orbital missions around Mars fly about 300 miles above the planet.

“The Emirates Mars Mission has this super clever orbit where they’re actually further out,” explains Bethany Ehlmann is a professor of planetary science at Caltech, and President of the Planetary Society. Ehlmann says Hope’s orbit will allow it to study Martian weather in a new way, since it can watch a large swath of the planet for hours at a time.

“No satellite in Mars orbit that does this,” says Ehlmann. “So we don’t really understand what the weather is like, how things vary over the course of a day.”

The Hope probe also has instruments that can look at the big picture of what’s going on in the planet’s atmosphere.

“They’re going to get atmospheric data that we’ve never seen before,” Ehlmann says.

As much as the mission is designed to improve the scientific understanding of Mars, there’s another purpose: to demonstrate the United Arab Emirates’ ability to carry out a technically complex mission and get younger Emiratis excited about math, science and engineering.

“That goes down to my 4-year old who knows where Mars is,” she says. “And I never recall in my lifetime seeing children looking up at the sky and saying ‘that’s Mars and we have a mission arriving there.’ “

Of course, that just adds to the stress while waiting to see if Hope’s engines fire on time to put the probe into orbit.

The last thing you want to do is disappoint a 4-year-old.