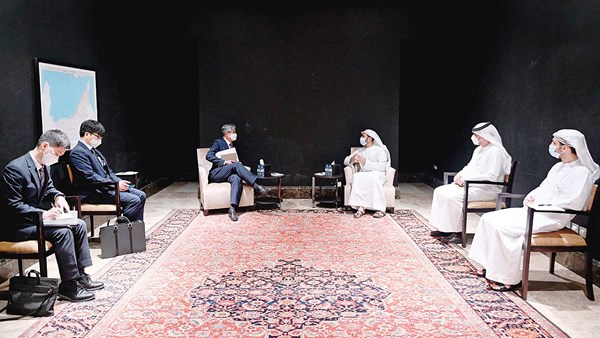 Yesterday, the United Arab Emirates and the Republic of Korea held the first session of the Joint Consular Committee, in order to advance and consolidate cooperation in all joint consular fields for the care and service of the citizens of the two countries. The first meeting of the committee was preceded by the signing ceremony of the memorandum of understanding to establish the joint consular committee between the two countries, which was signed on behalf of the UAE by Faisal Lutfi, Assistant Undersecretary of the Ministry of Foreign Affairs and International Cooperation for Consular Affairs, and by Korea Lee Hyun, Deputy Minister of Consular Affairs and Koreans Abroad at the Ministry of Foreign Affairs. external. The two sides expressed their hopes that this memorandum would be a basis for further cooperation in the consular field to serve the citizens of the two countries, in a way that enhances bilateral relations. In his speech during the meeting, Faisal Lutfi conveyed the greetings of His Highness Sheikh Abdullah bin Zayed Al Nahyan, Minister of Foreign Affairs and International Cooperation, his praise of the depth of bilateral relations between the two countries in the consular field, and his wishes for success for this meeting. He stressed the importance of cooperation in the consular field, and its role in advancing and strengthening bilateral relations between the two countries, praising the positive developments that have been achieved during the past two years in the field of bilateral consular cooperation in the midst of the challenges arising from the global “Covid-19” pandemic, and thanked all the efforts made by The two sides provide distinguished consular services and facilitate the movement of citizens of the two countries.

Faisal Lutfi expressed the UAE’s keenness and interest in strengthening and developing relations between the two countries, in a way that reflects the aspirations and directions of the higher leadership. He added that the bilateral relations between the UAE and Korea have witnessed qualitative leaps since the beginning of the global “Covid-19” pandemic, which directly contributed to the consolidation of these relations and moving them forward, whether at the bilateral or global level. He stressed that the United Arab Emirates and Korea have strong and solid relations based on a long and rich history and based on many common interests. Lee Hyun, Deputy Minister of Consular Affairs and Koreans Abroad, praised the leading position that the UAE enjoys at the regional and international levels, and the vital role it plays at all levels. He affirmed his country’s endeavor to work on closer consular cooperation, to serve the citizens of the two friendly countries. He praised the development of bilateral relations between the two countries over the past years, especially in the field of consular cooperation, and during the global “Covid-19” crisis in particular. He praised the experience of the UAE in this field and all the facilities it provided to Korean nationals who were on its soil during those circumstances, which are considered pioneering experiences, stressing that his country aspires to develop cooperation and exchange experiences with the UAE in this field, for the benefit of the citizens of the two countries. It strengthens the bilateral relations between the two friendly countries. During the meeting, the two sides discussed a number of common consular issues between the two countries, and plans to follow up and develop them, and discussed ways to enhance joint consular cooperation between the United Arab Emirates and Korea. Representatives from the departments of the Ministry of Foreign Affairs and International Cooperation, the Ministry of Interior and the Federal Authority for Identity and Citizenship, as well as representatives of the Ministry of Foreign Affairs of the Republic of Korea, participated in the meeting.