The Trump’s, but in wax, will be on display in Dubai 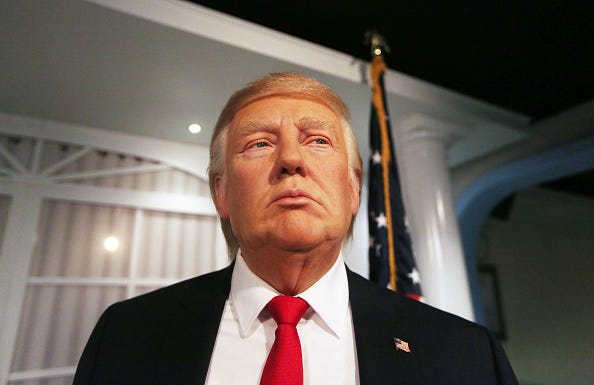 The wax figure museum known for welcoming tourists with smiling celebrity figurines opened its first branch in the Middle East on Wednesday.

The waxworks temple is located on a small artificial island off the coast of Dubai and includes 60 celebrities from Kylie Jenner to Chinese President Xi Jinping. The halls will also be filled with a handful of Bollywood dance stars who are “busting a move.”

PHOTO OF THE DAY: People visit the wax versions of the Trumps at today’s opening of Madame Tussauds Dubai. pic.twitter.com/1vsMsmCe22

The figure of the former president has him wearing a red tie while seated at a desk as he is looking down at his smartphone. Next to him stands the former First Lady in a blue dress, her classic look during the 2016 presidential campaign.

“He looks very real, but he’s not quite orange enough,” Marwa al-Haddad, a 27-year-old visitor, said after snapping a selfie, the Associated Press reported.

The wax figures were created by a team of 20 artists at the London studio who spent six months getting all of the features right. The team pours wax into metal frames and then is sculpted with clay. The hair on the wax statues is real human hair and is methodically implanted using needles, the AP reported.

When deciding who to design for the collection, Madame Tussaud’s team did an extensive population survey to determine who visitors would want to see most. At the moment, there is no President Joe Biden on display, but a company spokesperson told the AP that he could be featured in the future.

Launched by "Dar Si Hammad" and its German partner "Water Foundation".Fog Harvest is based on the innovative idea of ​​extracting water from fog on...
Read more
News

Watched by thousands of fans of the international eventThe performances were presented on the "Jubilee Garden" site, and appeared lively, and full of cheerful...
Read more
News

The Murban crude oil futures contract has carved out a foothold in the trading landscape in the just over six months since it launched,...
Read more