A new Real Housewives city is in town and ready to take the popular franchise to new heights. The Real Housewives of Dubai premiered Wednesday night on Bravo, and theGrio has five big takeaways for what could become the franchise’s most popular city yet. 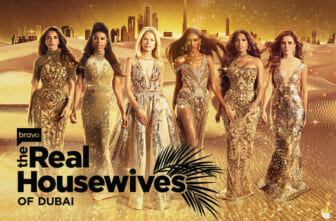 Wealth is in every corner of the episode as each cast member breaks down the lavish lifestyle of Dubai. “Everywhere you walk it’s just gold, gold, gold, honey, and we’ve got a lot of gold diggers too,” Chanel Ayan, Dubai’s first Black supermodel, states in the episode. Caroline Stanbury, who joins the cast years after starring in Bravo’s Ladies of London, says in a confessional, “Anything is possible in Dubai. People come here to reinvent themselves every single day.”

As Brooks says, native citizens account for only “12 percent of the local population that makes up Dubai; the other 88 percent is ex-pats. Forget about the new Middle East, this is the new world.” The cast itself features three Black women. Ayan, Brooks – an Afro-Latina major player in the beauty sector and real estate market – and Lesa Milan, founder of Mina Roe, a luxury maternity fashion brand.

“The queen has landed,” Ayan declares in the first seconds of the episode. From that moment it’s off to the races for the supermodel who very well may become a fan favorite reality star. As theGrio previously reported, Ayan’s confidence was on full display at the New York City premiere of RHOD during a livestream Q&A. When asked who her favorite housewife is, she told the audience, “I think the best Housewife is me, because they’ve never seen me before, honey!”

The premiere episode was filled with even more memorable one-liners from Ayan. For instance, she introduced herself as a “badass b_tch” in Swahili, Somalian, Ugandan and English. Yes, she speaks all four languages fluently. “Not bragging, honey, I am the best of the best there is,” she proclaims in a confessional. Her larger-than-life personality makes for a fascinating reality TV viewing experience. Not only does she bring captivating personal scenes to the show, but immediate tension within the group from women who don’t take to her braggadocious nature so well.

Nina Ali and Sara Al Madani round out the cast. Ali is a businesswoman and entrepreneur born in Lebanon and raised in Texas. She moved to Dubai ten years ago. Madani is an Emirati local, award-winning serial entrepreneur and the group’s newest member.

The women are connected to at least one other member of the group, making for endless possibilities with scenes. For example, Brooks and Ayan have known each other for years. Both know Stanbury, who is good friends with Nina, who invites Sara to her dinner, and so forth.

The episode also contains some classic Real Housewives tropes. A game of “she-said, she-said” causes major friction at the first sit-down dinner. Basically, Stanbury is having a “hen party” (bachelorette) for her second wedding and invites everyone except Ayan. Stanbury insists she and Ayan are not close, but Ayan reveals at dinner that Brooks told her that Stanbury claimed she wasn’t invited because she, “isn’t important.”

Brooks, however, has a different version of their conversation, saying she expressed to Ayan that Stanbury was only inviting people important in her life. This sparked an intense back-and-forth between Brooks and Ayan, which has the potential to be one of the greatest feuds in the franchise by the looks of their first blow-up.

The first episode of The Real Housewives of Dubai is available to stream on Peacock now.