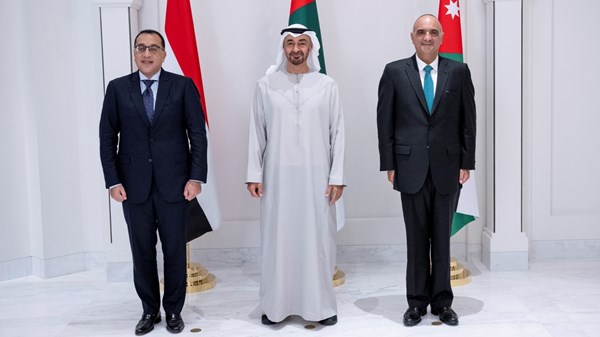 His Highness Sheikh Mohamed bin Zayed Al Nahyan, President of the State, May God Protect Him, received today Saturday Dr. Bishr Al-Khasawneh, Prime Minister of the Sisterhood of the Sister Hashemite Jordan, and His Excellency Dr. Mustafa Madbouly, Prime Minister. Minister of the Southern Arab Republic of Egypt, on the occasion of their visit to the State to announce the “Integrated Industrial Partnership for Sustainable Economic Development” between the UAE, Jordan and Egypt, the details of which will be announced tomorrow, Sunday.
During the meeting, which took place in the Shati Palace, His Highness welcomed the Jordanian and Egyptian Prime Ministers and conveyed his greetings to His Majesty King Abdullah II bin Al Hussein, King of the Hashemite Kingdom of Jordan, and His Excellency Abdel Fattah Al – Sisi, President of the Arab Republic of Egypt, wishes the two sisters Jordan and Egypt further progress and prosperity.
His Highness praised the “integrative industrial partnership” and stressed that it is a pioneering step that will bring good and development to the peoples of the three countries, pointing out that the changes taking place in the world require deepening economic partnerships between the countries of the Arab region, inventing new formulas for cooperation between them, strengthening their integration and investing in the qualitative benefits of each nation; With the aim of achieving sustainable development, strengthening the response to common challenges and global crises and expanding self-reliance, especially in vital sectors related to national security, such as food, health, energy, industry and others.
For their part, the Prime Ministers of Jordan and Egypt expressed their joy at meeting His Highness Sheikh Mohammed bin Zayed Al Nahyan and conveyed to him the greetings of His Majesty King Abdullah II bin Al Hussein and His Excellency President Abdel Fattah Al-Sisi and their wishes for His Highness health and well-being, and reaffirmed the zeal of their two countries to make the integrated industrial partnership a success and to achieve its desired goals.
The meeting was attended by His Highness Sheikh Nahyan bin Zayed Al Nahyan, Chairman of the Board of Zayed bin Sultan Al Nahyan Charitable and Humanitarian Foundation, His Highness Sheikh Mansour bin Zayed Al Nahyan, Deputy Prime Minister and Minister of Presidential Affairs, His Highness Sheikh Al Zahed bin Zabed Nahyan, and His Excellency Dr. Sultan bin Ahmed Al Jaber, Minister of Industry and Advanced Technology, His Excellency Dr. Anwar bin Mohammed Gargash, Diplomatic Adviser to His Highness, President of the State, and His Excellency Humaid Obaid Khalifa Obaid Abu Shabs, Chairman of the Abu Dhabi Accountability Authority.