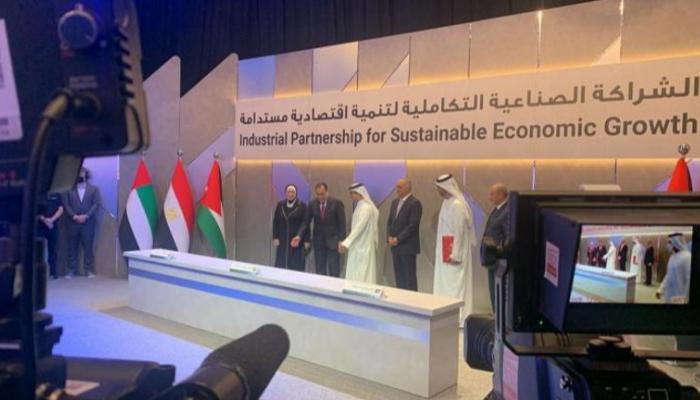 On Sunday, the United Arab Emirates announced the allocation of an investment fund managed by ADQ Holding Company worth $ 10 billion to invest in projects stemming from the partnership with Egypt and Jordan, which was overseen by Sheikh Mansour bin Zayed Al Nahyan, Deputy Prime Minister and Minister of Presidential Affairs, and Jordanian Prime Minister Bishr Al-Khasawneh. And Dr. Mostafa Madbouly, Prime Minister of Egypt.

The dimensions of the integrated industrial partnership between the Emirates, Egypt and Jordan in terms of content, objectives and expected results go beyond the productive aspect, albeit the most prominent, as it is linked to supply chains and seeks to achieve local abundance in three countries, to include many social and knowledge aspects, such as the production of thousands of jobs and technology transfer, Achieving sustainable economic growth, an image that achieves a state of stability that develops over time into a relative prosperity in products that constitute a national priority and an added value for the United Arab Emirates, Egypt and Jordan.

In the light of the rapid changes that the world is witnessing today, which constitute a shortage in the supply chains for food and pharmaceutical raw materials, especially after studying the Covid-19 pandemic and the subsequent Russian-Ukrainian crisis, the three countries are looking at the case as an advanced and accompanying step towards strengthening the common Arab action, which is what the UAE considers a major and necessary goal, among the country’s goals for the next fifty years.

Recent developments in the world, including cross-border challenges in their effects and after-effects, have proven that the existence of Arab integration for sustainable development and the unification of efforts between brothers is crucial to meet the challenges that may arise in the coming days. globally, as the partnership agreement provides a solid base for strengthening and empowering sectors. The strategy, like food and medicine, is to take advantage of the benefits and opportunities that the parties to the agreement have.

The partnership is strengthened by the political, economic and social capacities of the Member States, which are determined to unite their energy and invest their various capacities in order to meet what the region is going through and move from the industrial field to a new phase of sustainable development. different areas.

There is no doubt that the growing joint capacity of the three countries will strengthen their regional and international presence as a key player in various events and developments, especially in the Middle East, and will strengthen their position as a regional hub as the partnership helps to increase the three countries’ influence and presence in the global market, depending on the diversity it provides at the level of capabilities, experience and diversified investment opportunities.

Through a range of jobs and job opportunities, which it will create in many prominent sectors, the partnership plays an important role in strengthening the structure and resilience of the communities of the three countries, whose total population reaches around 122 million people, almost half of whom are young people. .

The main projects that will be implemented under the partnership will help to support the efforts to locate industry and agriculture and increase the volume of local production in the signatory countries, which will enable them to increase production and reduce imports and thus saving a large amount of budgets. allocated to imports to be used in other areas that increase the quality of life of citizens.

With this initiative, the three countries complete a long process of fruitful cooperation in various areas, in particular the development of government performance and the quality of the services provided by government institutions. Government to the two countries through various activities such as lectures and workshops, and the application of some of the ideas that the UAE has already successfully implemented.