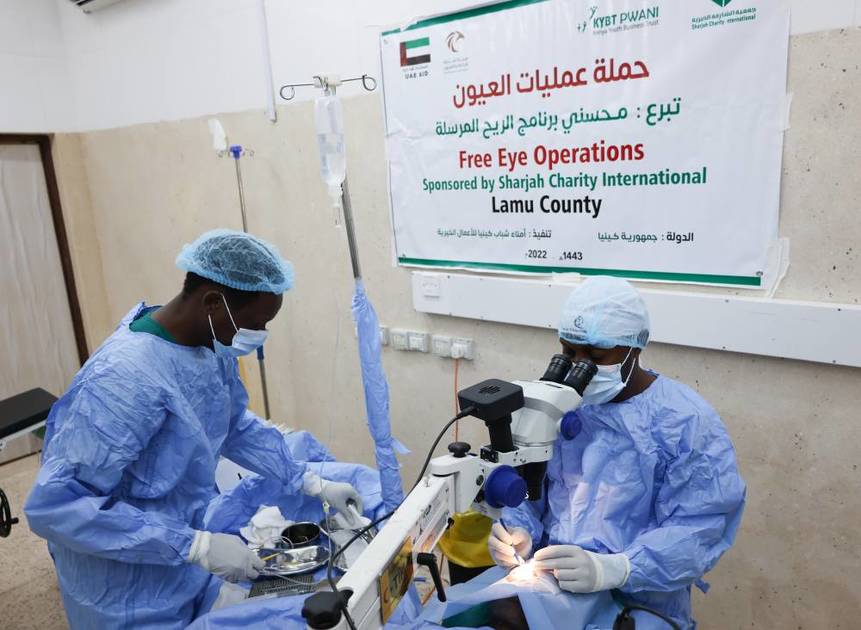 The delegation from the “Sharjah Charity Society” led by Ali Muhammad Al-Rashidi ended his visit to the Republic of Kenya after a business trip that witnessed the implementation of a number of charitable projects that carried donations from benefactors and blessed the efforts of the community and its the quest to bring joy to the souls of the needy and deliver the charity of donors to those who deserve it, in different regions targeted help.
The delegation, whose work lasted for 7 days, included Abdul Rahman Muhammad, acting director of the Corporate Communication and Marketing Department, a media delegation from the Sharjah Radio and Television Authority and a number of famous social media. of the suffering they experience, from the lack of services and the lack of the easiest necessities of life, as well as a sharp deterioration of the service facilities.
Al-Rashidi said: This visit came in the implementation of what was stated in the annual plan, and according to reports and studies on the areas that have the greatest need and the type of projects that are most appropriate to meet the needs in these areas, for to complete the humanitarian projects by being implemented, where we organized the “mass wedding” project, which came with the support of the donors of the program “Sent Wind”. He contributed to the marriage of 50 grooms in the village of Lamu and achieved psychological and social stability for them in an atmosphere of joy and happiness. The project is the first building block for family building and the formation of healthy generations who are able to serve their countries. It also represents a social call that aims to raise awareness of the importance of reducing dowry. The recipients expressed their gratitude to the association for this kind initiative. As part of health projects, the delegation launched an anti-blindness campaign that brought the light back to 100 patients who underwent vision correction surgeries, cataract removal and corneal transplantation. Enables the person to trust himself, to become an active member in the development of his community.
He pointed out that the visitor program also included the distribution of food to needy families with 500 baskets to a large number of inhabitants of the targeted villages within the “Feed Food” project. This confirms the values ​​of solidarity and the feeling of the people of the Emirates for their brothers in the far corners of the world. He explained the distribution of packed lunches, which included wheat, rice, sugar, edible oil, flour and everything that meets the needs of families.
Points out that the association has charitable projects in the Republic of Kenya amounting to 989 projects completed years ago. We inspected a large segment of these projects, in particular the development and production projects, to ensure the continuity of their work and the extent of the implementing bodies’ involvement in the periodic maintenance operations for them. It pays off on an ongoing basis.
Al-Rashidi added that the visit also included the launch of the medical camp, which provided a large package of free preliminary examinations, for the early detection of diseases that the population suffers from, raising health awareness and reassuring the recipients of their health. In addition to distributing medical equipment and wheelchairs to people with disabilities, to alleviate the negative psychological impact of disability.
Support productive families
He stressed that the charity campaign in Kenya also implemented the “Productive Families” project, in which sewing machines were made available to women skilled in the craft, to be a job opportunity that gives them a return from earning their hands to meet their living needs without having to wait for help from charities. Assistance for this project also included the distribution of motorcycles and transport vehicles to a number of young people working in the profession of driving and transporting passengers and luggage. He pointed out that the association’s initiatives and projects impressed the deserving people, who expressed their gratitude for this great work.
Al Rashidi thanked Ambassador Tariq Al Shehhi – Chargé d’Affairs for the UAE Embassy in Nairobi for his support and facilities to the association’s delegation since the moment of arrival, which greatly influenced the success of the visit and the achievement of its goals. He also thanked Sharjah’s radio and television authority for their presence in the delegation.To highlight the role of the association, the size of its work and its impact on improving conditions for the beneficiaries. He also thanked the benefactors who took the lead in supporting these initiatives until they were realized. He expressed his deep gratitude to the board of the association for its constant follow-up of the delegation’s movements, the celebrity celebrities who followed the delegation, and the “Kenya Youth” team for their efforts in accompanying the delegation.