Freedom Jacob Caesar, the business mogul whose two pet tigers have triggered safety concerns among residents of Wonda World Estates, has explained that he bought the wild animals to boost Ghana’s tourism.

The owner of the plush estates in Accra said he bought the animals in Dubai and brought them to Ghana legally. Disclosing that an animal specialist built a cage for the animals and removed any danger they pose to the community. 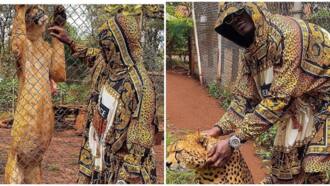 “I went in to buy these animals to add the value of tourism in our country. I wanted to go into the Safari World by making sure that Ghana becomes the first country in the whole of West Africa, East Africa and Central Africa, except for South Africa that have these animals.

“We wanted to be the first that will have it and so, I went in for the male and the female version of it, I have been keeping them on me for six months. I brought experts from outside to create safety cage for these animals so they don’t become dangerous to the public,” he told journalists in Accra on Thursday, May 19, 2022.

His explanation follows safety concerns raised by residents of the estate. Residents said efforts to get Freedom Jacob Caesar, the owner of the property, to remove the animals have been unsuccessful.

Robbers raid home of doctor while dealing with hospital emergency; this is the 3rd time

Meanwhile, YEN.com.gh has reported in a related story that police in Accra have said two pet tigers belonging to the young business mogul would be removed from the Wonda World Estates after residents raised safety concerns.

The tigers were being kept in the residential neighbourhood also owned by the young businessman, known in private life as Nana Kwame Bediako, sometimes called Cheddar.

However, following numerous complaints from residents captured in a Daily Guide report that the handling of the wild animals makes them feel insecure, police have said they have liaised with the Forestry Commission to relocate the seven-month-old tigers.