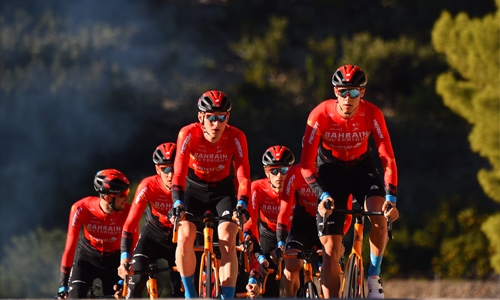 Team Bahrain Victorious, founded by His Majesty the King’s Humanitarian Works and Youth Affairs representative and Supreme Council for Youth and Sports chairman His Highness Shaikh Nasser bin Hamad Al Khalifa, announced yesterday their seven-member squad that will be competing in next week’s UAE Tour.

The seven-stage race is the season-opening event of the 2021 UCI WorldTour.

It will be held from Sunday to Saturday next week.

The Bahrain Victorious lineup will be led by Poels and Haig, off the back of strong performances at Tour de la Provence.

The race will feature four flat stages for the sprinters, two climbing stages and a 13km individual time trial, which will be critical at deciding the general classification.

Action will start in the town of Al Ruwais through Abu Dhabi and move through four more of the seven independent city-states of the UAE before finishing back in Abu Dhabi. Alongside Poels and Haig, the team is strong, with Caruso starting his first race after a top 10 finish at last year’s Tour de France in support of the team’s general classification contenders.

Bauhaus will battle it out for the sprint stages after his impressive win on the final stage of the Tour de la Provence last week.

It will also be Milan’s first WorldTour race and an exciting test for the 20-year-old Italian eyeing the individual time trial on stage two.

He said: “We have a strong team for the first WorldTour race of the season.

It’s an important one for Bahrain, being in the Middle East.

However, It’s an important race for all the teams being the first WorldTour race, which shows with the team line-ups.”

Regarding the team strategy, Pellizotti said: “We’ve structured the team for all types of stages.

Bauhaus is showing good form after his win at Tour de la Provence, and there are four stages for him to fight for with the support of Fred Wright and Jonathan Milan.

We then have an ITT on Stage 2, an important stage for the GC and a good test for Milan.

For our leaders, Wout is in good shape after his fourth place overall at Tour de la Provence and Jack is a great climber who is capable of a good result.

We also have Caruso, who is a good climber and time trialist and has had two good training camps at Altea and Teide, and so we can expect a good race from him.”