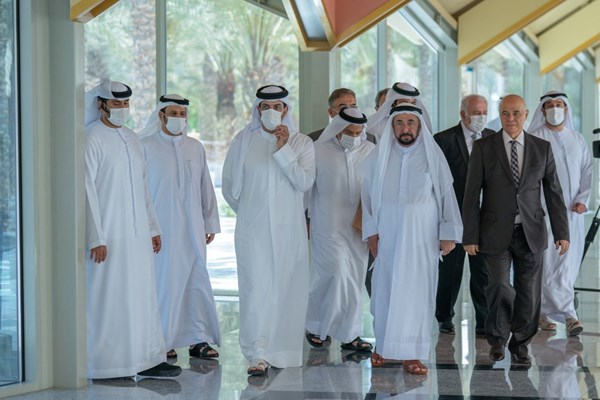 His Highness Sheikh Dr. Sultan bin Muhammad Al Qasimi, Supreme Council member and ruler of Sharjah, met this morning with His Highness Sheikh Sultan bin Ahmed bin Sultan Al Qasimi, deputy ruler of Sharjah, president of Sharjah University and a number of university officials. During the meeting, Hans Højhed exchanged speeches on a number of scientific and academic topics that would contribute to the university’s continued progress in all scientific, academic and research areas. The meeting was also about the university’s future plans in connection with the expansion of academic programs and public facilities and the strengthening of scientific partnerships with various prestigious scientific institutions. After the meeting, His Highness inspected Sharjah’s ruler of the new air-conditioned corridor project, which connects all university buildings, including colleges, laboratories, the library, the restaurant hall and others. The corridors allow students to easily move between the university’s facilities in an air-conditioned and shady environment, which protects from the sun’s rays and heat, and which reflects positively on the students’ readiness to study and diligently perform their work. The hallways are designed in accordance with the beautiful architectural environment that characterizes the University of Sharjah, with large areas and glass sections that allow students to see all the university’s facilities and green areas. The meeting was attended by Dr. Hamid Majul Al Nuaimi, President of the University of Sharjah, Dr. Qutaiba Humaid, Vice President of Medical Colleges and Health Sciences, Majid Muhammad Al Jarwan, Vice President of Public Relations, and a number of university officials.