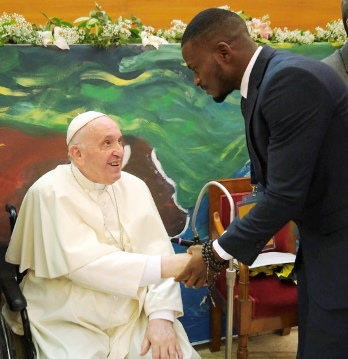 Thoronka, now studying in the UK, invented a device that uses kinetic energy from traffic and pedestrians to generate clean power. He is the first winner of the Global Student Prize, with his win announced by Hugh Jackman on the 10th November 2021 as part of a virtual ceremony broadcast from UNESCO’s headquarters in Paris

Accompanied by Chegg President and CEO Dan Rosensweig, he joined 50 students from around the world attending the Pope’s inaugural lecture of the “Laudato Si’” School, to mark the launch of the International Educational Movement Scholas Occurrentes.

The event, held in the Aula Magna of the Urbaniana University, was attended by personalities from the world of art, sport and technology, representatives of civil society from the countries in which education movement Scholas is active, including young people who have taken part in the educational programs that the organisation has developed in recent years.

For a year, these young people will develop projects of socio-environmental impact in their communities and the actions planned for the current year in the various countries in which Scholas is present were announced at the launch event.

The Varkey Foundation launched the Chegg.org Global Student Prize, a $100,000 sister award to the Global Teacher Prize, to create a powerful new platform to highlight the efforts of extraordinary students throughout the world that are making a real impact on learning, the lives of their peers and on society beyond.

“It was an enormous honour to meet His Holiness Pope Francis and hugely encouraging to see him and Scholas being so supportive of young people around the world in their efforts to tackle environmental and other concerns.

“The experience of meeting the Pope, whilst at the same time seeing so many young people from every corner of the planet come together to take positive action to help their world and its future, is one that will stay with me forever,” said Thoronka.

Optim Energy ran a successful pilot program in Thoronka’s neighbourhoods, Makawo in the northern part of Sierra Leone and Kuntoluh east of Freetown. With just two devices, the start-up provided free electricity to 150 households comprising around 1,500 citizens, as well as 15 schools where more than 9,000 students attend.

Thoronka is currently developing plans to expand into the healthcare sector, which needs power to chill medicines and vaccines and create sufficient light for treating patients after dark.

Jeremiah is a United Nations Academic Impact Millennium Fellow and Optim Energy was voted the most Innovative Energy Start-up 2020 by United Nations Major Group on Children and Youth (UNMGCY), and the Sustainable Development Goal (SDG) 7 Youth Constituency. Jeremiah is also one of the World Wildlife Fund’s top 100 Young African Conservation Leaders. Jeremiah will use the Global Student prize money to help expand Optim Energy to reach 100,000 people by 2030.