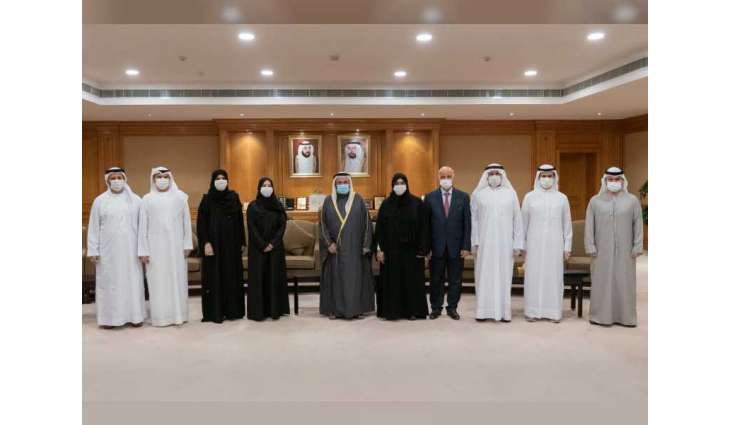 SHARJAH, (Pakistan Point News – 19th Jan, 2021) Under the chairmanship of His Highness Sheikh Dr. Sultan bin Mohamed Al Qasimi, Supreme Council Member and Ruler of Sharjah, President of the University of Sharjah, Her Highness Sheikha Jawaher bint Mohammed Al Qasimi, wife of His Highness the Ruler of Sharjah, and Chairperson of the Supreme Council for Family Affairs, was conferred an honorary PhD. by the board of Trustees of the University of Sharjah (UoS).

This comes in recognition of her humanitarian and social achievements locally, regionally and internationally, and its pioneering and qualitative initiatives, including its establishment of the Sharjah Women‘s Club and the Supreme Council for Family Affairs that serve the social sector in the Emirate of Sharjah.

The Supreme Council for Family Affairs participates in decision-making processes and in legislation related to women, children, the family and youth, and the council also supervises vital institutions, including Sharjah City for Human Services, Family Development Centers, the Department of Culture and Information, the Child Safety Department, the Health Education Department, in addition to many associations.

Her Highness Sheikha Jawaher bint Mohammed Al Qasimi has also established over the past decade many institutions such as: the “Riyada” Training Center for Training and Development, the Sharjah Businesswomen Council, and The Big Heart Foundation, in addition to its support for many humanitarian institutions.

This came during His Highness, Ruler of Sharjah presiding over the meeting of the Board of Trustees of the University of Sharjah, Monday afternoon, at his office at the university.

His Highness the Ruler of Sharjah praised the excellence performance of the University of Sharjah in overcoming the negative effects of the Covid-19 virus epidemic on educational systems.

His Highness, the Ruler of Sharjah, welcomed the new members of the Board of Trustees, noting that they will form an addition to the university’s march and its progress by activating and expanding their roles and creativity in a wider manner in proportion to the position that the University of Sharjah has attained from progress and success. His Highness also thanked the members whose membership in the Council had ended.

His Highness thanked Prof. Hamid M.K. Al Naimiy, Chancellor of the University of Sharjah and his work team for their contribution to the development and progress of the university at the local, regional and global levels and in its various works, especially in the fields of scientific research.

His Highness expressed his pride in the many achievements of Sharjah academy for Astronomy, Space Sciences and Technology, which is supervised by the University of Sharjah, which he said included the discovery of two asteroids and the accreditation of the Sharjah Astronomical Observatory as a global observatory relied upon by the International Astronomical Union in monitoring small celestial bodies.

The members of the Board of Trustees thanked His Highness, Ruler of Sharjah, President of the University of Sharjah, for the interest he attaches to supporting the university and its development.

The council approved the minutes of its previous meeting, for the council to approve the external auditor’s report for the year 2019/2020, and the university’s financial report.

It also adopted a proposal on research grants for interdisciplinary research “large projects”, and a proposal on a project to attract, interest and develop the skills of Emirati youth graduates of postgraduate studies, especially PhDs, through various training and social aspects to become scientists, researchers and innovators. It also approved the strategic plan of the University of Sharjah, and the scientific research process in University of Sharjah, continuing education and business in the fall semester 20/21 and a report on Sharjah Oasis for Technology and Innovation.

The Board of Trustees also approved a proposal to establish a medical journal at the university, another proposal on the subject of a practicing professor as an academic rank, also proposal on the recognition of the final qualification in the specialisation for academic ranks, and the graduation of students who completed graduation requirements for bachelor’s and diploma programmes in the summer and fall semesters was approved.

The council listened to a report on the latest developments and achievements of the University of Sharjah, and the report referred to the university’s five-year strategic plan 2019-2024, which was launched by the university in the fall of 2019/2020.

Then the report touched on the University of Sharjah‘s handling of the Covid-19 pandemic, indicating that it successfully dealt with this sudden and unusual situation and continued in all its activities and work by adopting various technological methods and working remotely.