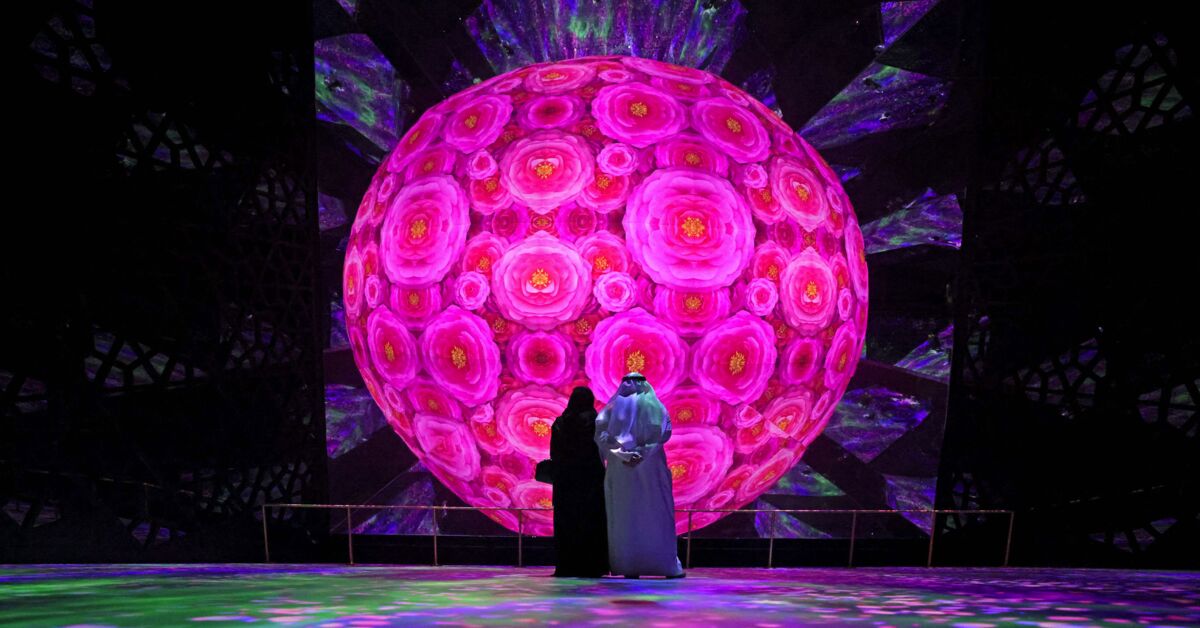 A film demonstrating bilateral relations between the two countries was projected onto an exterior wall of the Saudi pavilion on an inclined mirror facade that turns into a projection screen at night.

A week before this neighborly regard, Saudi Arabia announced that 44 multinational companies would move their regional headquarters to the Saudi capital, Riyadh.

A number of these firms are based in the UAE and in Dubai in particular, which for some time has housed a variety of headquartered regional companies. Its proximity to Saudi Arabia has been a convenient gateway for multinationals to conduct business.

The companies granted licenses to operate in the kingdom are from the construction, health, consumer goods and technology sectors, and include firms such as PepsiCo, Deloitte, Unilever and oil giant Baker Hughes.

Fahd al-Rasheed, president of the Royal Commission for Riyadh City (RCRC), told Reuters he expects the 44 firms to move to Riyadh within a year and some had already done so. He said the target was 480 companies by 2030.

According to Bloomberg, Saudi officials are talking to 7,000 companies around the world about opening regional headquarters in the kingdom.

Al-Monitor spoke to an executive working on a strategy in the region who said the overt move by the kingdom could be seen as an aggressive action to force regional headquarters to Riyadh. But, he added, “It could also be viewed as healthy business competition. But forcing the hand of global companies to move is never easy; it is all about enticing players with the right policies.”

The announcement of the granted licenses comes ahead of schedule, considering the Saudi directive announced in February 2021 that — effective January 2024 — companies that did not have their regional headquarters in Saudi Arabia would risk losing their government contracts.

Some committed to the move even earlier. In January of this year, a total of 24 multinational companies signed agreements to establish their offices there.

One of the 44 companies moving to the kingdom is Siemens Mobility, a separately managed company owned by Siemens AG, which currently has its regional headquarters next door across the border in the UAE.

A spokesman for Siemens Mobility confirmed that the company had signed a memorandum of understanding to establish its headquarters in Saudi Arabia in January.

“The exact location is still to be determined, and the regional headquarters aims to cover the GCC,” the spokesperson for Siemens Mobility told Al-Monitor.

A press pack from the RCRC stated that “Licensed Regional Headquarters operating in the Saudi economy ahead of January 2024 will have access to government tenders.”

Al-Monitor reached out to other firms for comment but received no response.

There are signs that Saudi Arabia seeks to ease some of its conservative restrictions. There has been a swift implementation of economic and educational reforms to modernize the economy and upskill the workforce.

Rasheed said in a press release, “We are undergoing a rapid transformation as we look to double the city’s population and increase its economic footprint threefold by 2030. Four megaprojects in the city are in progress to considerably advance quality-of-life rankings globally.”

He also stated that an easing of entry into the Saudi market would help them tap regional market opportunities in the largest economy in the region.

The Kingdom of Saudi Arabia has launched an industrious roadmap — Saudi Vision 2030 — to broaden the economy and reduce its dependence on oil. The strategic framework seeks to tackle three vital pillars: a vibrant society, a thriving economy and an ambitious nation.

The fifth annual Future Investment Initiative (FII), a business conference launched in 2017 by Saudi Crown Prince Mohammed bin Salman, was the venue for the licenses. FII is a global, nonprofit foundation focused on securing a zero-carbon footprint society.

The three-day summit in Riyadh brings together business leaders, ministers and heads of state.

Rasheed said the companies “… will bring new expertise, research and development as well as innovation in a wide range of sectors, resulting in knowledge transfer in the medium to long term and improvement in the local talent pool. By 2030, the program will contribute $18 billion to the local economy and create around 30,000 new jobs.”

He added, “We are determined to create an environment that unlocks business opportunities, broadens the economic base and creates jobs for Saudis.”

Recent data shows that the unemployment rate in Saudi Arabia has decreased slightly below its pre-COVID level. Yet a policy brief from 2019 found that Saudi youth unemployment is among the highest in Middle East-North Africa countries.

Saudi Arabia’s General Authority for Statistics showed that the private sector’s contribution to their GDP was below 40% in 2018. And according to the site Trading Economics, in 2019 the UAE exported $24 billion worth of products to Saudi Arabia.

Some news reports have taken the view that Saudi Arabia is attempting to lure companies out of Dubai. However, according to the executive that Al-Monitor spoke to, “The UAE has a three-decade head start as the regional financial and trade hub.”

A recent announcement by the UAE news agency stated that Dubai is merging its economy and tourism departments. Among the targets are increasing visiting tourists by 40% and expanding export markets by 50%. Another mission is to attract 100,000 companies within three years and 400 annual global economic events by 2025.

Back at Dubai Expo, the UAE and Saudi Arabia shared an achievement with their pavilions being among the seven buildings to earn a platinum rating in Leadership in Energy and Environmental Design (LEED), which is the highest possible ranking from the global green index developed by the United States Green Building Council.