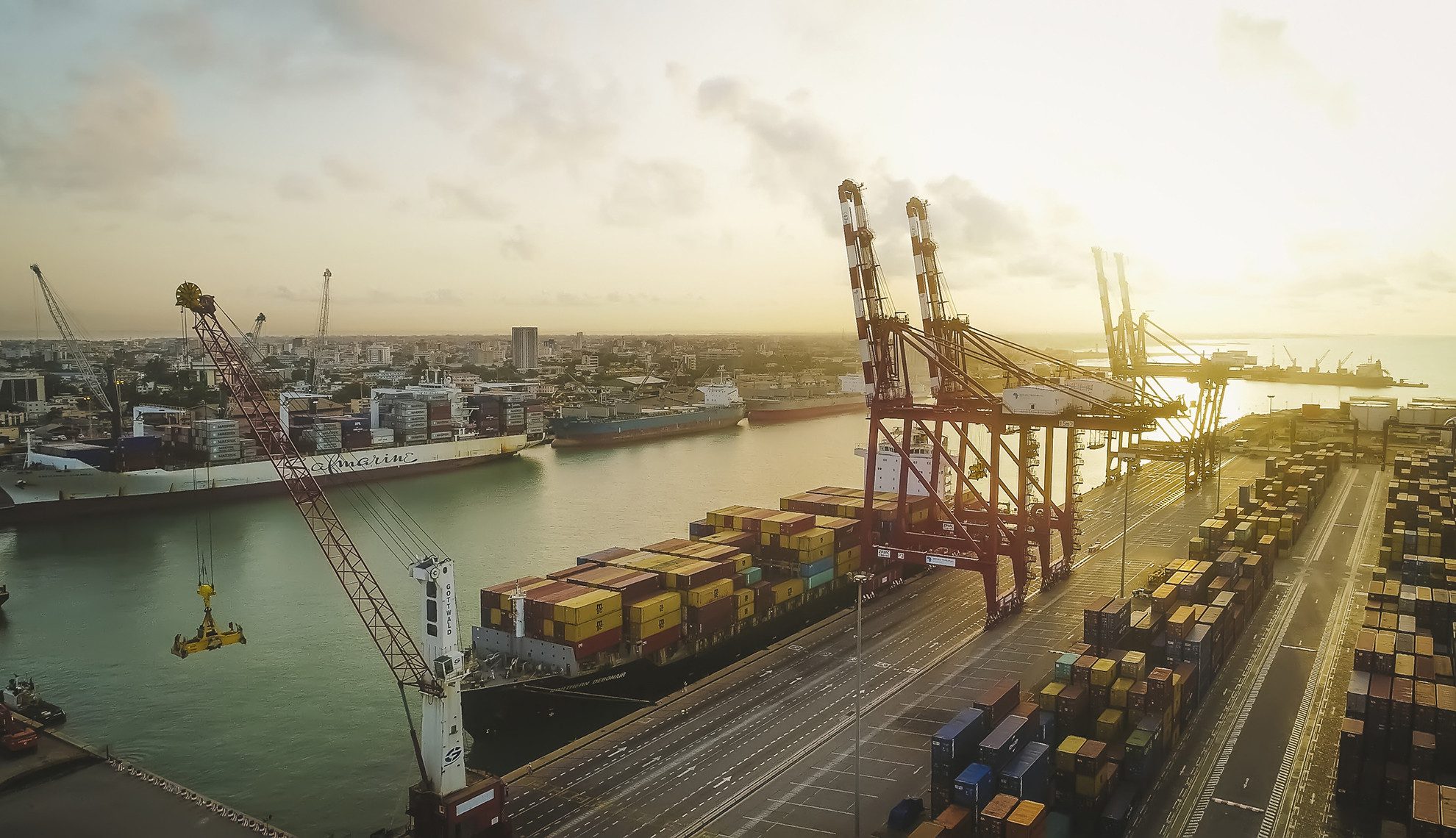 The Beating Heart of Benin

The modernisation of Benin’s economic engine, the Port Authority of Cotonou, is set to bolster the West African country and the wider region, according to Sales and Marketing Director, Kristof Van den Branden

The Port Authority of Cotonou holds a unique position in the region and is very important to Benin’s economy.”

Generating more than 60 percent of Benin’s GDP on its platform, the Port Authority of Cotonou is a key national player that accounts for the vast majority of international trade and customs revenue generated in the West African nation.

One of the biggest ports in the region, the Port Authority of Cotonou is also well-positioned on the Atlantic Ocean to act as a transit port, unlocking trade to landlocked countries in West Africa such as Mali, Burkina Faso and Niger via the Cotonou-Niamey corridor.

As a port authority, it is responsible for ensuring the maintenance and operation of the port’s facilities, managing the port area and carrying out improvement and extension works.

The Port Authority of Cotonou thus provides basic marine services, including towage and pilotage, controls general access for people, vehicles and security, and is responsible for maritime infrastructure such as buoys or the quay walls.

With 2,350 metres of quay wall space spread over a pair of wharfs and a breakwater, the Port Authority of Cotonou is unique in that the port is essentially one basin, in which all the different shipping methods are handled.

In addition to towage and pilotage, the Port Authority of Cotonou provides other value-added services including moorage, safety watch and ship rentals, as it makes haste on its ambition to become the preferred regional logistics platform.

Particular attention is paid not only to the quality of its services, but also the cost, which remains competitive in the West African region. For this to remain the case, however, it has required the Port Authority of Cotonou to continue to invest and improve, with the sole purpose of making the port more efficient and modern.

Since 2018, the Port Authority of Cotonou has benefitted from a partnership with Port of Antwerp International (PAI), the consultancy and investment subsidiary of the Port of Antwerp, in order to expand and strengthen its position as the economic heartbeat of Benin.

Indeed, these port actors account for 90 percent of international trade, 80 percent of customs revenue and 45 percent of tax revenue in Benin.

Despite this, PAI was called upon by the Benin government to further reform and futureproof the Port Authority of Cotonou so that it could continue to compete with surrounding ports in the region, tasked with modernising the port organisationally, renovating obsolete facilities, and preparing for expansion.

“PAI has a management contract with the government of Benin via its Ministry of Infrastructure and Transport. It is a strict management mandate, whereby key functions of the Port Authority of Cotonou are appointed by PAI,” explains Van den Branden, whose current role at the port was opened by PAI in 2018.

For the Port of Antwerp, the partnership represents a way to maintain and strengthen its position as a market leader in West Africa, and exemplifies its aim to engage in a sustainable future for African ports.

A three-year extension to the consultancy project has recently been signed by the Port Authority of Cotonou, whose ambition is to create an innovative, secure and reliable logistics platform for international trade, ensuring sustainable socio-economic development in Benin and the sub-region as a result.

Thanks to the Port of Antwerp’s support, the Port Authority of Cotonou has already taken concrete steps towards the modernisation of the port, from infrastructure and procedure upgrades to the training of administrative and maritime personnel.

Several port professionals from the Port Authority of Cotonou, which directly employs around 700 members of staff, have come over to Antwerp’s training centre for tailor-made courses in view of maximising the efficiency of port operations, and with the Port of Antwerp partnership being extended to 2024, more renovative measures are to follow.

Over the past couple of years, a Port Master Plan has been developed for the Port Authority of Cotonou, the execution of which commenced in July 2021.

“A modern and efficient port and terminal infrastructure contributes to increased volumes passing via Benin to landlocked countries, as well as reducing landed costs for importers,” notes Van den Branden.

“Creating infrastructure to allow larger vessels to come and discharge at the port is lowering the cost-per-tonne of freight.”

Forecasts prepared by independent institutions show that the Port Authority of Cotonou must prepare to double the volume of cargo it handles by 2030.

It means acting now, which is why the Port Master Plan has been adopted by the Benin government, with the first contracts signed in July 2021 and works already underway.

Comprised of six value-added projects worth a total of €400 million, the Port Master Plan aims to improve access for larger vessels and the efficiency of handling operations, reduce waiting times for vessels and transit times for trucks, as well as increasing the port’s capacity to over 20 million tonnes.

“We will be creating 20 hectares of bulk and breakbulk terminal capacity to the east of the port, and we’ll be increasing the port’s vessel reception capacity to 365 metres in length, up from 275 metres,” Van den Branden shares.

The Port Authority of Cotonou already receives several types of vessels, with large container lines such as Maersk, MSC and CMA regularly calling at the port, all of whom have local representation via their own offices or local agents. Equally, major bulk, breakbulk and tanker operators utilise the Port Authority of Cotonou for loading and/or discharging purposes, whilst specialised carriers such as reefer vessels and car carriers are also received at the port.

“Additionally, the Port Master Plan foresees an extension of the current port basin, which is also set to be dredged to depths of at least 15 metres, the renewal of existing quay walls, the installation of a second petroleum jetty, and the creation of a new central access point for trucks to enter the port.”

At the same time, the Port Authority of Cotonou is being positioned as a logistics platform for the West African region with the installation of a Port Logistics Zone.

“The zone will have a special customs and fiscal regime, dedicated to added-value activities,” confirms Van den Branden.

Pharmaceutical or spare parts companies, for instance, will be able to set themselves up in the Port Logistics Zone and easily distribute their products within the region.

“Instead of having stock in Europe or Dubai, which results in increased lead times, the goods will be available for distribution from Cotonou, wherefrom an ocean-going vessel is able to ship to the entire west coast of Africa within a few days.

“We envisage having dedicated banking services, laboratory services and so on available within the zone. The Port Authority of Cotonou will be totally transformed five years from now, and it is not a dream anymore – the works have started and are in progress,” Van den Branden beams.

Digitalisation is also high on the agenda, with partners such as Webb Fontaine creating Single Window solutions for the clearance of goods, interconnecting all stakeholders involved in foreign trade and allowing them to perform trade procedures on one platform.

Technical partners such as Benin Control and Benin Customs Service, meanwhile, have created online and digital solutions for cargo declaration, valuation, and the tracking of goods.

“Digitalisation will play an increased role in ports around the world, and Benin has taken a leading role in the region,” acclaims Van den Branden.

Over the coming months, the Port Authority of Cotonou itself will be developing an advanced Port Community System, whereby all actors involved in the handling of vessels and goods will be electronically linked on a blockchain basis.

Allowing for full transparency on the position of goods at any one time, the Port Community System will eventually lead to more efficiency and reduce the throughput time of goods in the port, ultimately reducing transaction costs.

“Port operations are like a big machine, and the process is only as strong as its weakest link. Therefore, the Port Authority of Cotonou works closely together with every stakeholder to ensure the smoothest operation possible,” Van den Branden emphasises.

“Obviously, there are issues from time to time, however we have become a more flexible organisation, ready to listen to clients and partners and open to open to innovation and development where possible.”

It goes without saying that infrastructural works will be a major gamechanger at the Port Authority of Cotonou over the coming years, from the Port Master Plan through to the Port Community System and everything in between.