Nigeria’s president, Muhammadu Buhari has landed in Dubai to condole with the people of the United Arab Emirates (UAE) following the death of their former leader, Sheikh Khalifa bin Zayed Al Nahyan.

Zayed Al Nahyan demise was announced on Friday, May 13 after he passed away at the age of 73.

According to the Daily Trust newspaper, President Buhari left for the UAE on Thursday and arrived in Dubai in the early hours of Friday.

Legit.ng gathered that the president visited the UAE alongside Isa Pantami the minister of communication and digital economy, Zubairu Dada; the Minister of Federal Capital Territory, Mohammed Bello, and the Minister of Aviation, Hadi Sirika.

According to a statement issued by the president’s media aide, Garba Shehu, the congratulatory message to the new leader was a reaffirmation of Nigeria’s good relationship with the UAE.

“Under the new leadership, President Buhari looks forward to a bigger and stronger partnership for peace, stability, and prosperity of both countries.” 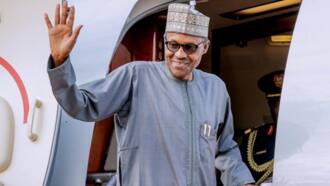 President Buhari is expected to return back to Nigeria on Saturday, May 21.

In another development, President Buhari has appointed Dr Adamu Tutuwa as the new substantive Director-General and Chief Executive Officer of the Federal Institute of Industrial Research, Oshodi (FIIRO).

Tutuwa’s appointment was approved by President Buhari, according to a statement released on Friday, May 20.

Similarly, President Buhari has approved the appointment of Abdulganiyu Jaji as the new Controller General (CG) of the Federal Fire Service (FFS) with effect from Friday, April 22.

The approval was disclosed in a statement signed by Aisha Rufai, Secretary to the Civil Defence, Immigration and Prisons Service Board (CDIPB) on Tuesday, April 26, in Abuja.

Jaji was the Deputy Controller General (DCG) in charge of Administration and Supplies at the FFS before his appointment as CG.