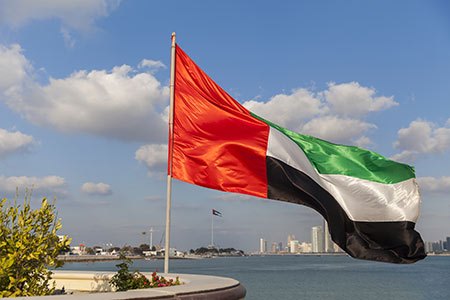 PGNiG has started the second stage of exploration works in Ras Al Khaimah Emirate, in the United Arab Emirates (UAE). The company is at the stage of making design and location arrangements for the first exploration well, which will ascertain the production potential of the licence where PGNiG operates.

The project assumes drilling an exploration well to a maximum depth of about 3500 m. Its location will be determined on the basis of the results of the analysis of the three-dimensional seismic image. PGNiG is beginning preparations for tenders, which will select contractors for drilling and other services. The drilling is planned to commence in 3Q22.

“The seismic surveys confirmed the probability of the presence of hydrocarbon deposits in the area of our licence. Detailed interpretation of the data will allow us to select a location which will give the best chance for a positive outcome of the drilling works,” said Pawel Majewski, President of the Management Board of PGNiG SA. “I am glad that thanks to our close cooperation with RAK GAS LLC, which is our licence partner, and the Ras Al Khaimah Petroleum Authority (RAKPA), which is the petroleum administration of the Emirate of Ras Al Khaimah, we can prepare a drilling plan and commence the second stage of exploration works on our licence,” added President Majewski.

Preparatory works connected with the organisation of tenders were one of the topics discussed at the meeting of representatives of PGNiG and RAK GAS LLC held on 5 May in Warsaw.

“We are very pleased to have had PGNiG exploring for oil and gas in Ras Al Khaimah for over 2 years and very much value the strong relationship we have built with PGNiG over this time. Having successfully acquired high quality 3D seismic, the oil and gas potential is now very clear, and we are delighted that PGNiG will be following up with a plan to drill an exploration well,” said Nishant Dighe, Chief Executive of RAKPA and CEO of RAK GAS LLC, after the meeting with PGNiG representatives.

The ongoing work is based on an Exploration and Production Sharing Agreement (EPSA), which PGNiG signed with RAKPA and RAK GAS LLC in January 2019. A PGNiG Branch was established in the Emirate and was granted an operating license in April 2019.

The first phase of the exploration work consisted of a 3D seismic survey. Geofizyka Torun, a PGNiG Group company, was responsible for its implementation.

Read the article online at: https://www.oilfieldtechnology.com/exploration/06052021/pgnig-preparing-to-drill-first-well-in-uae/