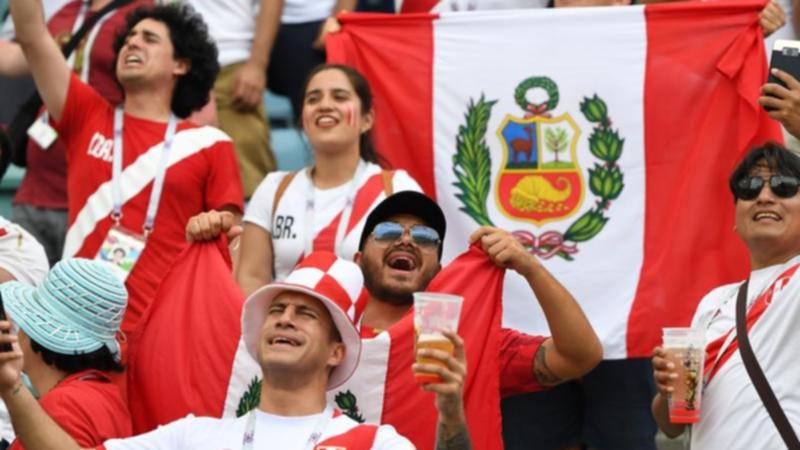 It’s nominally a neutral venue but the Socceroos are very much entering a hostile atmosphere when they take on Peru in their World Cup play-off in Qatar.

Up to 12,000 Peruvian fans are expected to descend on Doha ahead of Monday’s (0400 Tuesday AEST) match at the Ahmad bin Ali Stadium, as they try to cheer the South American nation to the 2022 World Cup.

In contrast there are expected to be about 500 Australian fans in the stands, meaning any Aussie green and gold is going to lost amid a sea of red and white.

Most of Peru’s support is expected to be drawn from the country’s diaspora with approximately 3.5 million of the nation’s inhabitants having migrated abroad, including large populations in Italy, Spain and France.

There is even one group of Australian-based Peruvians in Doha calling themselves the “Pe-roos” who have hedged their bets with custom-made jerseys bearing Socceroos gold on one side and the white with a distinctive red sash of Peru on the other.

An indication of the passionate support the Peruvians will enjoy for the game was shown on their arrival to their team hotel late on Friday, with a crowd of fans chanting, “Peru, Peru!” as their heroes walked through the lobby.

While the numbers are absolutely not in Australia’s favour, those who have travelled to support Graham Arnold’s team are ready to do their bit to motivate the Socceroos to a fifth-straight World Cup.

“We are very confident that we can make enough noise and rally enough support to get the team over the line,” Sydneysider Adrian Brent told AAP.

“Whilst we may not have a megaphone, we’ve gone out and bought whistles and air-horns, so we’ll be bringing plenty of noise and passion come Monday night.”

Brent, who had originally planned to support the Socceroos at the 2020 Copa America before the COVID-19 pandemic scuppered that trip, has travelled with a group of five to Doha and was in the stands for the 2-1 play-off win over the United Arab Emirates last Tuesday (Wednesday AEST).

Already the trip has been a memorable one for those who’ve trekked to Qatar from Australia, with a small group of fans invited to watch training on Thursday before meeting players for photos and autographs.

Socceroos captain Maty Ryan said the squad was appreciative of those who had made the effort to come and support them, even if it is a much smaller cohort than Peru will have in their corner.

“The more support we can get, the better and it always makes a difference,” Ryan told AAP.

“We’ve always encouraged as many Australians – or anyone with a connection to Australia – who want to get out there and support us, to try and do so.

“Cheer as loud as they possibly can and get behind the team.”