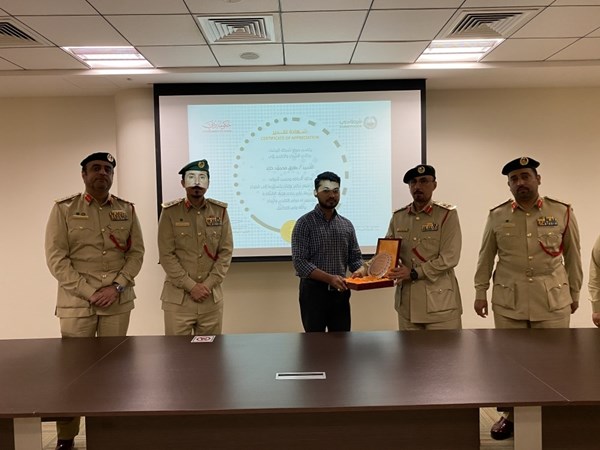 Dubai (Union)
Brigadier General Abdul Rahim bin Shafee, Director of Al Barsha Police Station, honored Tariq Mahmoud Khaled Mahmoud, an Indian citizen, for handing over a million dirhams to police found in the elevator of the building where he lives and who is located in the jurisdiction of Al Barsha Police Station, in the presence of Colonel Majid Al Suwaidi, Deputy Director of the Center, Colonel Ishaq Muhammad, Head of the General Service Department, Lieutenant Colonel Adel Musa, Head of the Administrative Affairs Department, and Lieutenant Mona Abdel Mohsen, Head of the department for customer satisfaction.
Brigadier General Abdul Rahim bin Shafi’s praised the honesty of Tariq Mahmoud Khaled, who embodies the noble values ​​we are proud of in our society, and stressed that this honor falls within the framework of the Center’s management’s interest in motivating the public, which helps to achieve the strategic goals of the Dubai Police General Command.
Brigadier General Abdul Rahim bin Shafie presented a certificate of thanks and appreciation to Tariq Mahmoud Khaled for his honesty and shrewdness, emphasizing that this honor comes within the framework of activating the role of community partnership between the Dubai police and the public, spreading good qualities and a spirit of cooperation and hand in hand to spread security and safety throughout the country, and praises the great role played by members of the community and their active contribution to upgrading the state’s reputation through their fruitful cooperation with the security services.