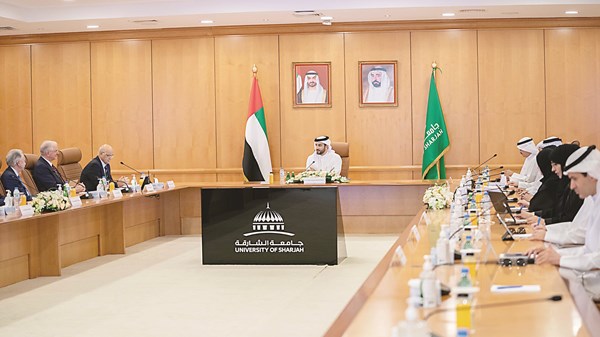 His Highness Sheikh Sultan bin Ahmed bin Sultan Al Qasimi, Deputy Ruler of Sharjah and President of the University of Sharjah, confirmed the continuation of the work in accordance with the qualitative future plans set by the University to continue its distinguished educational path and its continued progress and development within for various academic and scientific fields, as it is one of the leading universities at local, regional and global level. environment for all corners of the education process, including professors, students and administrative and technical bodies.
This happened during His Highness, who presided over the 53rd meeting of the Board of Sharjah University, which was held yesterday in its main building.
The Council also approved the University’s budget for the year 2022/2023, which amounted to one billion and eighty – three dirhams, which will contribute to the implementation and operation of all aspects through which it carries out its work and scientific mission. The board also approved awarding the professorship and honorary doctorates to a number of leading national personalities with valuable works in various intellectual, cultural and social fields.
The council also approved the graduation of students who in the spring semester 2021/2022 completed the graduation requirements for various programs with a total of 1598 male and female students, of which 1352 for bachelor programs, 12 female students for postgraduate diploma programs, 219 for master’s programs and 12 for PhD. programs. The council reviewed the report on the university’s plan to locate jobs, which included increasing the rate of saudisation to 65%, and directed the work to increase the percentage to include all the university’s sectors and bodies at different job levels. During the meeting, the members of the council became acquainted with the set of approved academic programs that the university will offer at the beginning of the next academic year, which are 125 programs divided into different scientific degrees, including 16 doctoral degrees, 49 “masters”, 3 postgraduate diplomas and 57 “bachelor”. The Council approved the report of the Compliance and Internal Audit Committee and approved a number of topics proposed by the Academic Committee, including new academic programs such as a Master of Science in Robotics, a Master in Orthodontics and a Research Fellowship Program for Emirati Youth, while approving to establish a Center for Excellence in Remedial and Transformational Medicine and a Center of Excellence for Healthy Aging. The council reviewed the reports on scientific research at the university, its classification, the number of students enrolled in academic programs and the possibility of continuing to submit them, in addition to the reports on attracting faculty members.

Center of Excellence for Therapeutics and Research Medicine
The meeting discussed the proposal to establish a “Center of Excellence for Therapeutics and Applied Research Medicine”, which targets groups of researchers in various disciplines to uncover complex disease dilemmas, find better treatment options for patients with cancer, diabetes, asthma and rare . diseases and achieve the mission of applied research medicine for the benefit of society. The council also reviewed a report presented by Dr. Hamid Majul Al Nuaimi, President of the University, in which it addressed a number of topics, including the education system followed at the University for the academic year 2021/2022.