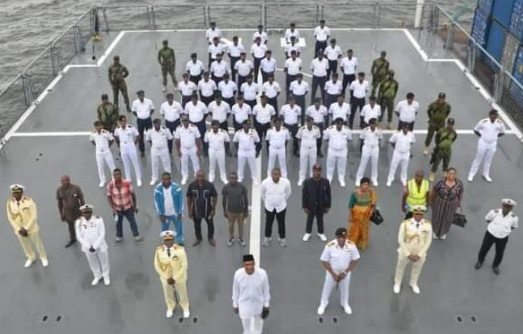 The Nigerian Ambassador to the Republic of Gabon, Raymond Udoffe Brown, has received the newly acquired ship of the Nigerian Navy at the Port-Gentil.

Brown was accompanied during the reception by the Flag Officer Commanding the Eastern Naval Command of the Nigerian Navy, Ibrahim Dewu, who represented the Chief of Naval Staff, Awwal Zubairu Gambo.

Sarah Sanda, media aide to the Minister of Foreign Affairs, Geoffrey Onyeama, in a statement in Abuja, said the presence of NNS KADA in Gabonese waters was part of the Nigerian government’s demonstration of commitment to the fight against illegal activities like piracy in the Gulf of Guinea.

In his remarks, Brown said: “The visit of ships like this to the Gulf of Guinea demonstrates the continued dedication of our forces, which shows every day their commitment to ensuring the security of national resources, economy and the people.” On the mission of the ship, Dewu said:

“This ship is not only for Nigeria, but also to fight against human trafficking, piracy, as well as serving as an evacuation ship in case of danger on the Gulf of Guinea and the strengthening of strategies between the forces. Our wish is to see the development of collaboration, a sustained cooperation and a sharing of training for the success of our navies.”

The 100-metre long and 16-metre wide NNS KADA was built in the United Arab Emirates.