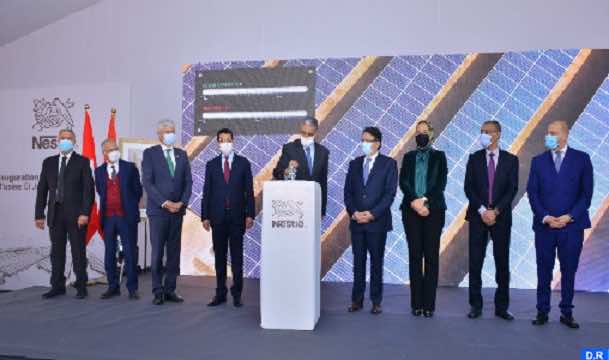 The station covers a land of 7,000 square meters adjacent to the company’s factory.

The solar station operates some 2,600 photovoltaic panels, and produces 1.7 gigawatts of electricity per year.

Nestle’s El Jadida solar project is the third station installed in the Middle East and North Africa after the inauguration of similar plants in Dubai and Jordan.

Moroccan state media said that the station also eliminates the emission of more than one million kilogram of CO2 per year.

The inauguration of the project is part of the strategy by the Swiss multinational company.

The company seeks to reduce Nestle’s CO2 emissions by 2030. The strategy aims for zero emission by 2025.

Qair, a company that specializes in renewable energies, built the solar station in collaboration with the Swiss company for a budget of MAD 12 million ($1.34 million).

Morocco’s Minister of Energy Aziz Rabbah attended the inauguration ceremony, where he recalled the country’s interest in the renewable energy sector.

The minister said the Nestle solar station in El Jadida is intended to be a  contribution to Morocco’s national energy strategy that aims to produce more than 52% of the country’s electricity from renewable resources by 2030.

He said his department encourages the integration of new energies at all levels of consumption in both urban and rural areas.

The official called on all stakeholders to take part in the daily efforts to make the environment healthier and more livable.

The official said that the industry sector represents 21% of final energy consumption and presents a source of savings.

He added that “studies have confirmed the possibility of achieving a saving of 22% of the energy consumption of the industrial sector by 2030.”

Rabbah identified the agri-food sector as the second energy consumer after that of construction materials.

The sector represents around 20% of the total energy consumption of the industrial fabric, with an estimated average consumption of 380,000 tonne of oil equivalent (TOE), including 250, 000 TOE thermal and 130,000 TOE electric.

Installed capacity of renewable sources amounts to 3,950 megawatts, which represents about 37% of the total installed electric power.

Nestle Morocco thanked Moroccan authorities for their support for the project.

Remy Ejel, Chairman and CEO  of Nestle Middle East and North Africa said: We thank the local authorities for their support, without which the completion of this solar station would not have been possible.”

Swiss Ambassador to Morocco, Guillaume Scheurer also commented on the project, saying  the company is delighted with the inauguration of the solar power plant.