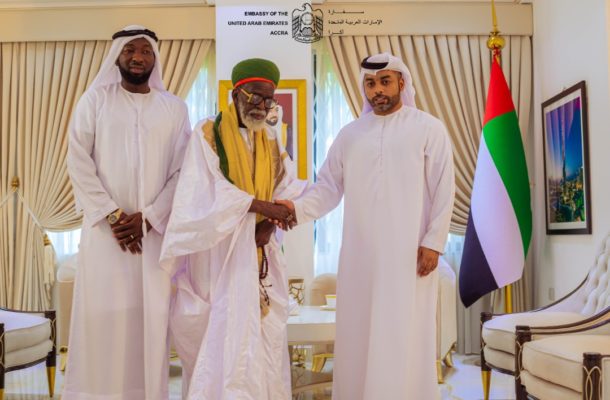 The National Chief Imam of Ghana, His Eminence Sheikh Osman Nuhu Sharubutu together with the Group Chairman of the Afro Arab Group, Ambassador Alhaji Salamu Amadu, have signed the book of condolences at the residence of the United Arab Emirates ( UAE) Ambassador to Ghana to commiserate with the people of the United Arab Emirates on the passing away of their President, His Highness Sheikh Khalifa Bin Zayed Al Nahyan.

Ambassador Alhaji Salamu Amadu, again on his Facebook page, shared a post to sympathise with the United Arab Emirates Ambassador to Ghana and the good people of UAE.

“A leader who has a clear idea of how the future should look has fallen, May Allah be pleased with your soul and grant you Jannah. You are a visionary, we have learnt a lot from you,” he stated.

Sheikh Khalifa took over as the UAE’s second president in November 2004, succeeding his father as the 16th ruler of Abu Dhabi.

His unfortunate demise happened on 13th May 2022.