In 2005, chimpanzees at the Tacugama Chimpanzee Sanctuary in Freetown, Sierra Leone, started getting sick. They would stumble, vomit and stop eating.

The illness came on quickly; some chimps were found dead before caretakers even knew they were sick. Searches for parasites, toxic plants or viruses responsible for the disease came up empty. Treatment couldn’t stave off death. Since then, 56 chimpanzees at the sanctuary have died of the mysterious illness, which has been dubbed epizootic neurologic and gastroenteric syndrome, or ENGS.

But a new study published this month in Nature Communications by researchers from the University of Wisconsin–Madison, Tacugama and an international team of colleagues reveals that an overlooked bacterial group known as Sarcina is linked to ENGS. Researchers found that most chimps sick with ENGS had Sarcina in their gut, and some harbored the bacteria in their livers, spleens and brains. The bacteria did not appear in any healthy chimpanzees. 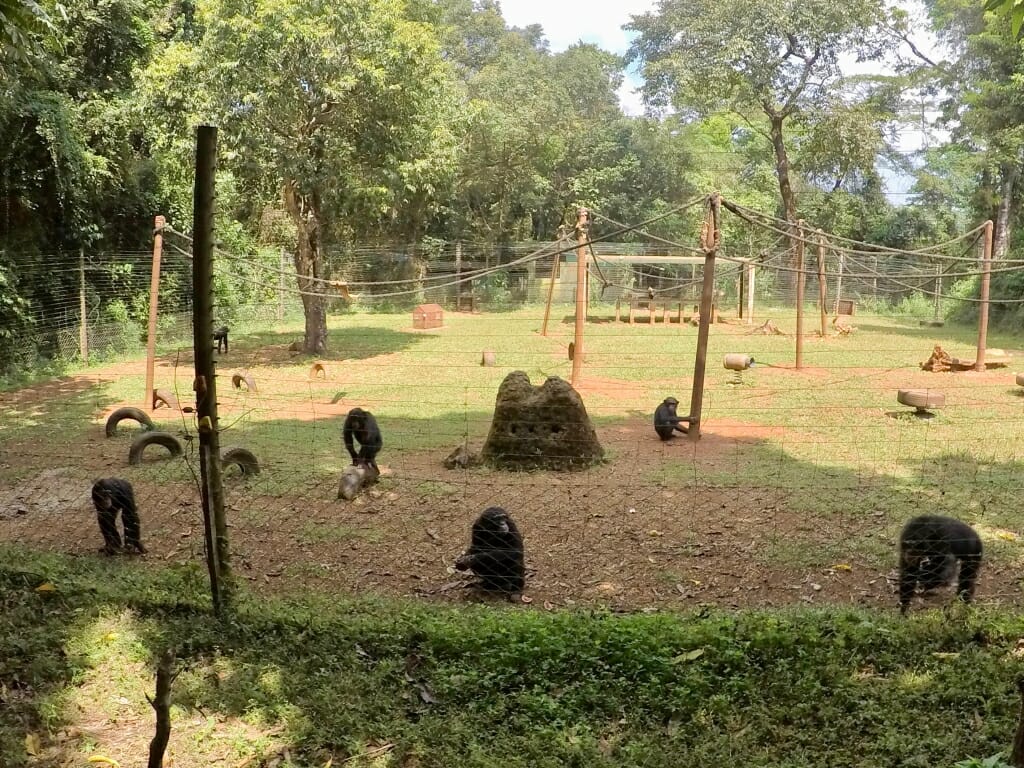 Chimpanzees in an enclosure at the Tacugama Chimpanzee Sanctuary in Freetown, Sierra Leone. Several dozen chimpanzees at Tacugama have succumbed to a mysterious disease linked to a bacterial infection. Tony Goldberg

The findings are helpful guidance for individuals treating sick chimpanzees at Tacugama, part of the Pan African Sanctuary Alliance, which supported the research because the results could aid other chimpanzee sanctuaries.

The study also suggests that Sarcina, which have only rarely been linked to disease in humans, may be more common, and capable of more serious infections in people and animals, than previously thought. Yet there is little concern over animal-to-human transmission, and for now the disease remains rare in humans.

“We may have identified an overlooked cause of human and animal disease,” says Tony Goldberg, a professor of epidemiology in the UW–Madison School of Veterinary Medicine who led the research. “This may be a group of species, some of which are perfectly normal soil bacteria, and some of which are deadly pathogens.” 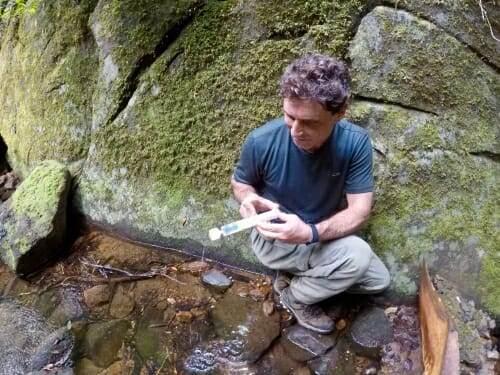 ENGS shows varied symptoms in chimps, suggesting that both their digestive and neurological systems are damaged. “When you see the chimps, they look like they are intoxicated with something,” says Andrea Pizzaro, the general manager and former lead veterinarian of Tacugama.

After years of struggling to pinpoint the cause of ENGS, veterinarians at Tacugama reached out to Goldberg, who studies emerging diseases and uncovers novel pathogens using genetic sequencing. Thanks to years of detailed veterinary work, Tacugama had tissue samples from both sick and healthy chimps they could share with Goldberg’s lab to search for pathogens.

Once the samples were in Madison, Goldberg lab members used genetic sequencing techniques to look for known and unknown viruses, bacteria and parasites. Just one group of bacteria emerged in tissues from sick chimpanzees — those from the Clostridiaceae family, which are linked to tetanus, botulism and other diseases.

Graduate student Leah Owens and other scientists involved in the study were able to detect the bacterium in the organs of ill chimps — but not healthy ones — and they were even able to see it in the brain of one chimp named Joko who had succumbed to the disease. In a pivotal moment, Owens was able to see the telltale four-leaf-clover shape of the bacteria she knew from genetic analysis must have been in the tissue samples: Sarcina.

“We may have identified an overlooked cause of human and animal disease.”

“We were still unsure what this bacterium was doing in the chimps, but we were very sure that it should not have been in the brain,” says Goldberg.

In late 2019, Goldberg and Owens traveled to Tacugama. They searched for sources of the mystery pathogen by collecting samples of soil, water and food.

“Without being on the ground in a place, doing an epidemiological study is really hard. There are often these factors that people don’t think to tell you about, but they stand out once you get there,” says Owens, first author of the new report. “Now I have a much better sense of how things are set up and where the potential sources are.” 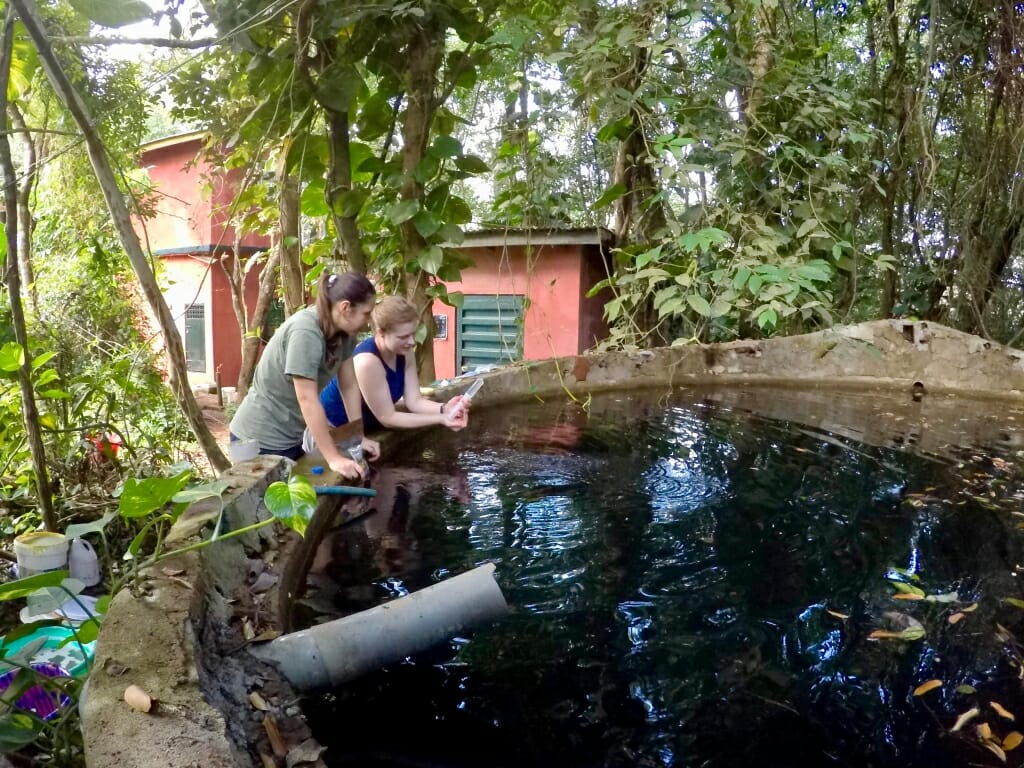 From those environmental samples, Owens was able to detect the bacterium using specific tests that she and Goldberg had designed back in Wisconsin. Owens was also able to grow the Sarcina bacterium in the lab. Although the pathogen proved difficult to keep alive, Owens succeeded in producing enough of it that study co-authors at the Naval Medical Research Center in Maryland were able to sequence the bacteria’s genome.

“Within that genome we found several different biochemical pathways that are associated with pathogenicity,” says Owens. One pathway could render the bacteria capable of turning the natural compound urea into ethanol, which could be responsible for the neurologic symptoms seen in chimpanzees. The bacteria also appeared to possess antibiotic-resistance genes.

The genome also revealed that the new bacteria, despite resembling other Sarcina microbes, was a new species. The researchers named the new species Sarcina troglodytae after the scientific name for chimpanzees, Pan troglodytes.

The study suggests that Sarcina may be capable of more serious infections than previously thought. Yet there is little concern over animal-to-human transmission.

Owens, who has pored over every report of Sarcina infection ever reported in humans and animals, says that identifying the species as pathogenic may help clinicians spot more cases of infection going forward. Yet it remains unclear how common Sarcina infection is in people, or how serious the infection might typically be.

In recent years, fewer chimpanzees at Tacugama have succumbed to ENGS. Veterinarians at the sanctuary have learned to identify sick animals sooner and developed treatments inspired by the identification of Sarcina as a contributing cause of the disease. Because Sarcina primarily reside in the gut, veterinarians provide probiotics and antibiotics to sick chimpanzees alongside supportive care to help counter the infection.

In just the past month, sanctuary staff identified and treated one sick chimpanzee.