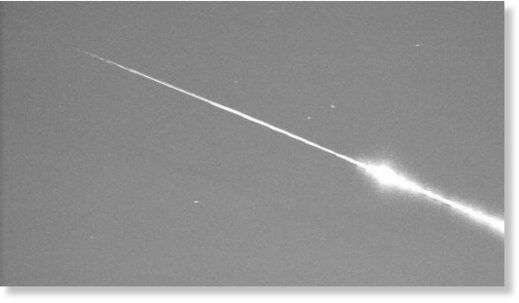 The rare occurrence lit up the evening sky for about 4 seconds.

A fireball streaked across the Abu Dhabi sky on Friday evening. According to the International Astronomy Centre (ISC), it was spotted at 6.32pm and lit the evening sky for about four seconds.

It was detected by the ISC’s UAE Meteor Monitoring Network. “The centre is analysing whether a part of the fireball reached the ground.”

Fireball is another term for a very bright meteor.

Mohammed Shawkat, Director of the ISC, had told Khaleej Times then that the meteor was travelling at a speed of 67,000km/hr when it entered the Earth’s atmosphere.

“The fireball was filmed by a special network of sophisticated astronomical cameras that are installed in different parts of the country and are managed in collaboration with the US space agency NASA.

“These cameras automatically record/film the appearance of any meteor that appears in the sky and send high-definition clips of the same, to the station that they are connected to. These clips are instantly transferred to the main centre in Abu Dhabi.”