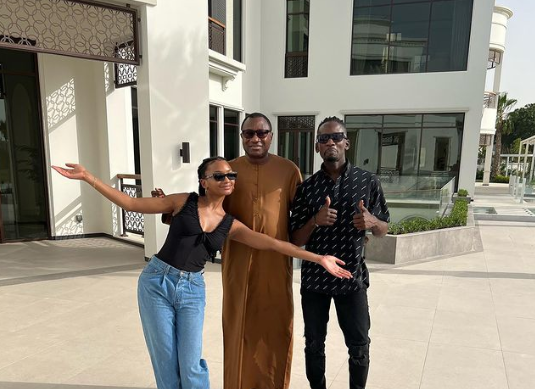 Femi Otedola, the Nigerian billionaire businessman, has received Temi, his daughter, and Mr Eazi, her celebrity fiancé, at his home in Dubai, United Arab Emirates.

In an Instagram post on Monday, the 59-year-old business mogul shared a picture of the lovers with him in front of his Dubai house.

Otedola described the couple as “lovebirds” while they posed for the picture.

“The lovebirds came to visit me at my home in Dubai …F.Ote,” he wrote.

In the comment section, Mr Eazi also hailed his father-in-law to be, while describing his Dubai home as a  “Palazzo”.

In April, the ‘Holl Up’ crooner proposed to Temi, who is a budding actress popular for her role in Kunle Afolayan’s ‘Citation’.

The movie star and her boyfriend have been dating since 2017.

Mr Eazi had earlier reflected on his relationship with Temi, saying it was one of the best things to happen to him in 2017.

“It is one of the highlights of my year. It’s been one of the nicest things to happen to me this year. You know love is sweet. At least I have more inspiration for plenty of songs,” he had said.

Temi, on the other hand, recently revealed how she knew Mr Eazi is the right man for her.

Copyright 2022 TheCable. All rights reserved. This material, and other digital content on this website, may not be reproduced, published, broadcast, rewritten or redistributed in whole or in part without prior express written permission from TheCable.