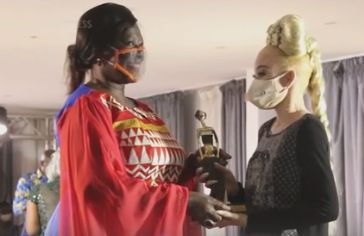 Models with albinism are fighting back against stigmas in sub-Saharan Africa.

Mony-Love Mbanzoulou and Jules Makosso are both 24-year-old models with albinism. The two friends were selected to walk in an international fashion show in Congo Brazzaville to fight the stigmatization of the condition.

Albinism is a genetic difference that causes a lack of pigmentation in the hair, skin and eyes. This can result in extra sensitivity to the sun and bright lights. People with albinism may have low vision and a higher risk of developing skin cancer. Albinism is especially prevalent in sub-Saharan Africa. According to the Associated Press, 1 in 1,400 people in Tanzania and 1 in 1,000 in select populations in Zimbabwe has albinism. Compared to the U.S., that is one in 18,000 to 20,000.

The Congo Brazzaville fashion was held to commemorate International Albinism Awareness day on June 13. The experience left Makosso with a sense of pride.

“It makes me happy, and it makes me proud of myself, to know that I worked hard to get here,” Makosso told the Associated Press. “It wasn’t an easy thing. It meant that I had to work a lot to get there. The result makes me feel good. It makes me happy to make proud my loved ones, my parents, those who support me.”

Meanwhile, Mbanzoulou, who began modeling in 2016, approached the sometimes unfriendly industry with fierceness.

“It’s not really easy, but we just get on with it,” Mbanzoulou told the Associated Press. “I am mentally prepared because since I was small, my father made me understand what kind of skin I have. Often when I walk in the street, when I am provoked, these little clashes, they don’t bother me, I’m already used to it.”

Mbanzoulou and Makosso are both represented by Bethy Yaca, who manages models with albinism.

“It’s not just Mony and Jules. There are other [models with albinism] who have difficulty finding work. Our first objective was to help them familiarize themselves and find a place for them in society, to encourage them to have confidence in themselves,” Yaca told the Associated Press.

People with albinism are not just subject to stigmas about their appearance, they often face marginalization due to erroneous superstitions and beliefs.

During the fashion show, which had the pandemic theme “under mask,” Mbanzoulou was unmasked as the winner of the 2021 Female Talent award. The recognition encouraged the model to keep pursuing her career.

“I don’t think that I will give up again because originally I did not want to participate in this competition. I was not ready,” Mbanzoulou admitted. “It was my godmother who encouraged me, who gave me the strength to do it, so I’m really happy.”

In The Know is now available on Apple News — follow us here!

Activism isn’t limited to the frontlines, you can donate to these 15 Black-led LGBTQ+ organizations to help make change.

More from In The Know:

What the heck should you get dad for Father’s Day? The Group Chat weigh in

Dad-to-be is horrified by balloon lesson on labor and delivery: ‘My wife gives birth in 7 weeks, this is terrifying’

Get In The Know
delivered to
your inbox daily.

We’re keeping you In The Know on the stories that matter to you.

People are bonding over common interests thanks to a Playboi Carti sample.

Easily a timeless piece in the wardrobe.

The “iCarly” star is better known by the moniker “Scam Goddess.”