When you subscribe we will use the information you provide to send you these newsletters.Sometimes they’ll include recommendations for other related newsletters or services we offer.Our Privacy Notice explains more about how we use your data, and your rights.You can unsubscribe at any time.

The Hope spacecraft commissioned by the United Arab Emirates has captured incredible images of Mars released today. The images were captured during the first-ever Arab interplanetary mission from a distance of around 15,500 miles.

The picture was shared in a tweet by Sheikh Mohamed bin Zayed Al Nahyan, de facto ruler of the UAE.

Alongside the glorious image, he tweeted: “The transmission of the Hope Probe’s first image of Mars is a defining moment in our history and marks the UAE joining advanced nations involved in space exploration.

“We hope this mission will lead to new discoveries about Mars which will benefit humanity.”

The Al Amal mission hopes to provide the most complete picture of the Martian atmosphere yet. 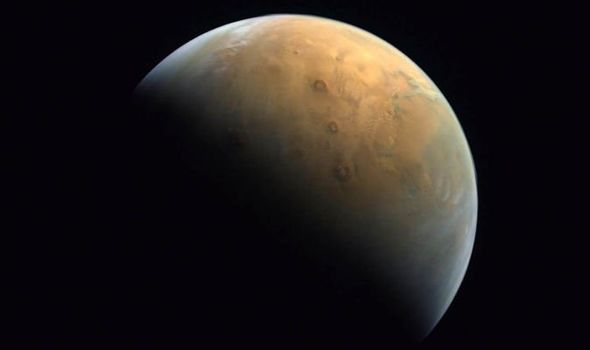 The probe will study daily and seasonal weather cycles, weather events in the lower atmosphere such as dust storms, and how the weather varies in different regions of the planet.

In addition, the spacecraft will gain insight into Mars’ atmospheric hydrogen and oxygen loss and other possible reasons behind the planet’s drastic climate changes.

The mission is being carried out by a team of Emirati engineers in collaboration with foreign research institutions and is a contribution towards a knowledge-based economy in the UAE.