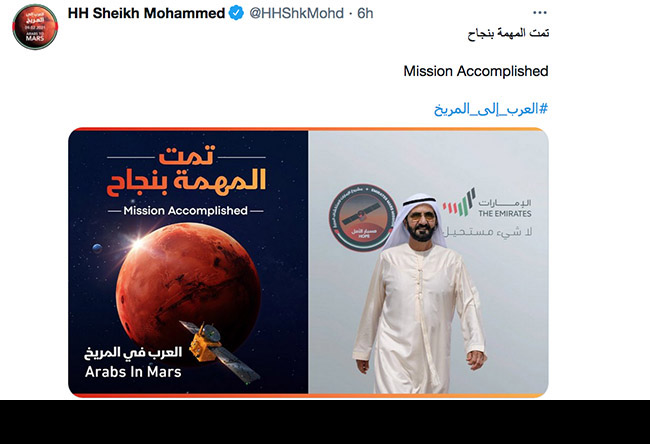 The first in a parade of three new visitors to Mars has arrived.

On Tuesday, the United Arab Emirates became just the fifth nation to successfully send a spacecraft to Mars when its robotic probe, named Hope, began orbiting the red planet.

It is the first interplanetary mission undertaken by an Arab country.

“From the UAE government’s perspective, basically 90% of this mission has been achieved successfully,” said Omran Sharaf, project manager of Hope, before the spacecraft’s arrival.

For the remaining 10%, there was little to do but watch and wait as the spacecraft executed instructions already loaded into its computer.

Sarah al-Amiri, who leads the science portion of the mission, said she had felt a full of range of emotions when the spacecraft was launched in the summer. But as it approached Mars, she said, “This is further intensifying them.”

Once in orbit, the spacecraft can begin its study of the red planet’s atmosphere and weather.

On Tuesday, controllers at the mission operations center in Dubai received word from the spacecraft that it had started firing thrusters to slow itself down and allow it to fall into the thrall of the gravity of Mars. Then, after the 27-minute burn was complete, they confirmed the probe was in orbit.

Cheers erupted in the control room.

Sheikh Mohammed bin Rashid Al Maktoum, the ruler of Dubai and the prime minister of the United Arab Emirates, was at the center to offer his congratulations and wrote “Mission Accomplished” on his Twitter account.

The mission is to spend at least two years studying how dust storms and other weather conditions near the surface affect the speed at which Martian air is leaking away into outer space.

One day after the Hope maneuver, a Chinese spacecraft, Tianwen-1, is to also enter orbit around Mars.

Then on Thursday next week, NASA’s latest rover, Perseverance, will also arrive at Mars.

All three missions launched in July to take advantage of a favorable alignment between Earth and Mars that occurs every 26 months.

The Hope mission is an unusual collaboration between the United Arab Emirates and the Laboratory for Atmospheric and Space Physics, a research institute at the University of Colorado.