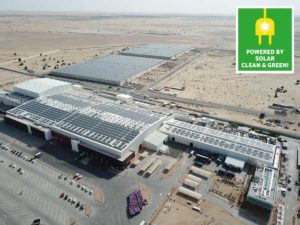 Mai Dubai, the bottled water company fully owned by the Dubai Electricity and Water Authority (DEWA), has become a net-zero energy consumer following the strong performance of its rooftop solar panel installations whichproduced more than 30 million kWh of power in 2020, while it consumed only 26 million kWh, according to its latest report. Thisachievement makes Mai Dubai’s operations which include its entire bottled water production and office to be fully powered by the sun’s energy.

The surplus of 4,190,213 kWh of energy were sent back to DEWA’s power grid, which means the company not only consumed 100 per cent of its own electricity from a clean energy source, but it also exported extra electricity into the grid. As such, the DEWA subsidiary contributed to the efforts of the UAE government to increase its energy production targets that come from renewables.

Commenting on the achievement, Alexander van ‘t Riet, CEO of Mai Dubai, said: “We are proud to announce that Mai Dubai has reached the net-zero energy consumption in 2020 in line with our core values which integrate sustainability in every aspect of our operations. Our efforts have further led to the company abating 15,500 metric tons (MT) of carbon dioxide emissions.

Mai Dubai is convinced that renewable energy is one of the key paths to achieving our environmental sustainability and the leading steps that we have taken are delivering great results, enabling us to continue providing high quality, innovative and safe products, as well as efficient services while becoming an example of sustainable production practices.”

In 2020, the company has witnessed 15 percent surge in demand for bottled water when the COVID-19 pandemic hit the country, which meant it needed to increase its production and thereby consume more electricity. Despite this, the company was able to meet the production demand and achieve 100 percent energy consumption through solar energy.

Mai Dubai has installed onsite an 18.1 MW capacity of rooftop solar system which uses about 52,056 solar panels, the second highest solar rooftop installation in the world while topping the charts in the Middle East for being the largest solar-powered bottled water company in the region.

Mai Dubaiis committed to promoting environmental sustainability in all aspects of its operations, including a LEED-certified office building.