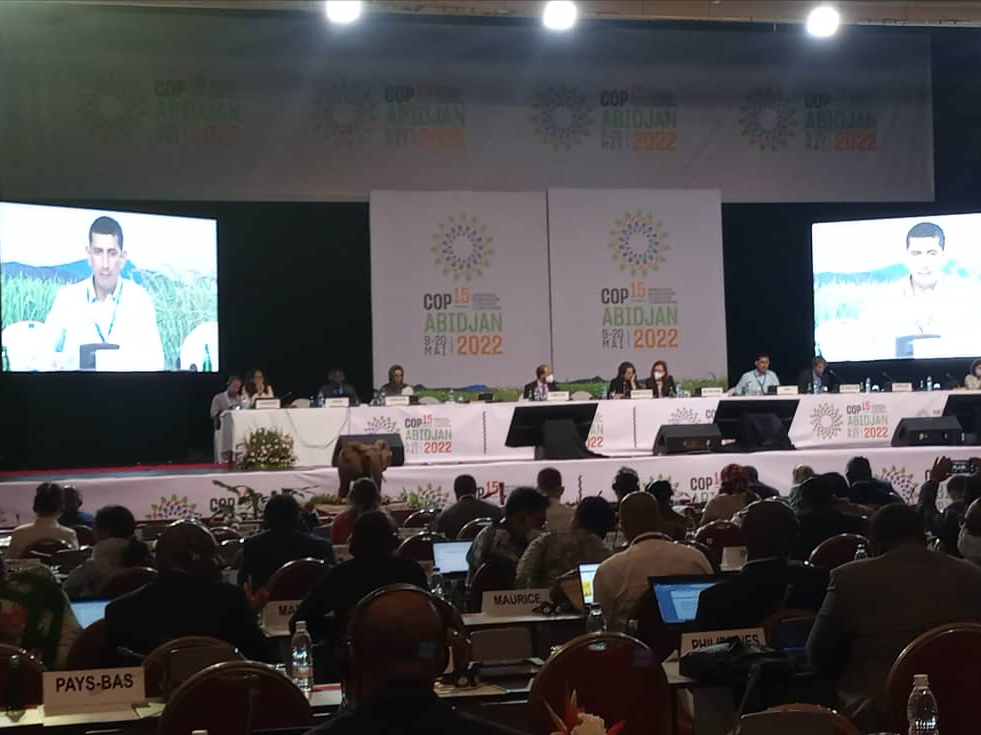 According to  Lerotholi Nkuebe, Director of Conservation from the Ministry of Forestry, Range and Soil Conservation, Lesotho is already implementing some of the recommendations that are being discussed at the conference of the parties (COP15) of the United Nations Convention to Combat Desertification (UNCCD).

It is the second week of the conference of the parties (COP15) of the United Nations Convention to Combat Desertification (UNCCD) taking place in Abidjan, Ivory Coast, where leaders from governments, the private sector, civil society and other key stakeholders from around the world meet to drive progress in the future of sustainable land management.

The COP15 meeting ends today. Nkuebe said Lesotho, through the Ministry of Forestry, Range, and Soil Conservation (MFRSC) with its development partners and relevant stakeholders, has been very sensitive in terms of encouraging involvement and inclusion of women and youth on land restoration decision-making and implementation activities.

Through the Ministry of Forestry, he said, “Lesotho is implementing projects including Sustainable Land Management, Reducing Vulnerabilities on Climate Change, Improving Adaptive Capacities of Vulnerable Populations, to mention a few, as part of its effort to combat the impact of climate change, capacitate people on climate change and reduce their vulnerability and restore the country’s degraded land.”

Lesotho is represented at the conference by, among others, the Minister of Forestry, Range and Soil Conservation Motlohi Maliehe, and Director of Conservation Lerotholi Nkuebe. The theme for the United Nations Convention on Combating Desertification Conference of Parties (UNCCD COP 15) is ‘Land, Life and Legacy: From scarcity to prosperity’. Nkuebe said land is an important resource that all depend on without which there is no life. He therefore said land restoration is very crucial to stop and reverse land degradation and desertification.

Africa has a strong stance in negotiating for drought policy formulation and adoption by the COP to enable more efforts being channeled to drought mitigation interventions.

He said through the achievement of land degradation neutrality (LDN) with its indicators; trends in land cover, trends in land productivity and trends in soil organic carbon stocks, there will be life on the land. He said these programs must be implemented in conjunction with communities’ livelihoods activities (income generating activities) to be able to transit from scarcity (food and water insecurity, poverty) to prosperity (food and water security, economic improvement). When asked about issues debated at the COP15, Nkuebe said the discussions include a drought protocol/binding instrument.

He said the Africa region has proposed the development of the policy on drought mitigation since the adoption of drought issues on addressing land degradation and desertification only focused on drought awareness raising and response. Much of the impact of land degradation and desertification is exacerbated by the impact of drought – with respect to intensity, scale, and duration of drought. Nkuebe said in the previous COP’s decisions, drought issues were addressed in terms of awareness raising and response, not on mitigation.

Africa has a strong stance in negotiating for drought policy formulation and adoption by the COP to enable more efforts being channeled to drought mitigation interventions, especially on the African region as it is the most affected by drought impacts. “The negotiations on this issue are still going on,” he said. He further stated that another issue under discussion is Land Tenure including land rights, especially for women and youth as they are the most affected groups, indicating it is generally known that women and youth do not have legal rights on land ownership until men as households’ heads are dead.

“COP15 is discussing how land tenure issues can be addressed politically, legally and traditionally as the main barrier to land access and ownership by women and youth is customary laws and practices for these groups. Gender and youth issues, as cross-cutting issues in all COP discussions, are also being discussed in terms of inclusion of women and youth, and other marginalized groups in land restoration interventions that are aimed at addressing desertification, land degradation and drought because these groups are playing major roles in land restoration due to high unemployment rates.”

“Their livelihoods depend on land for all ecosystems services, and the impacts of drought and land degradation cause them to migrate from the rural areas to the urban areas to look for job opportunities,” he stated. He said that there has also been consensus on building synergies and collaboration between the three Rio Conventions (CBD, UNFCCC and UNCCD) as their strategies, frameworks and activities are closely related.

This story was produced as part of the 2022 UNCCD Virtual Reporting Fellowship, a journalism fellowship organized by Internews’ Earth Journalism Network and the Robert Bosch Stiftung. It was originally published in the Public Eye News on May 17, 2022. It has been lightly edited for length and clarity.