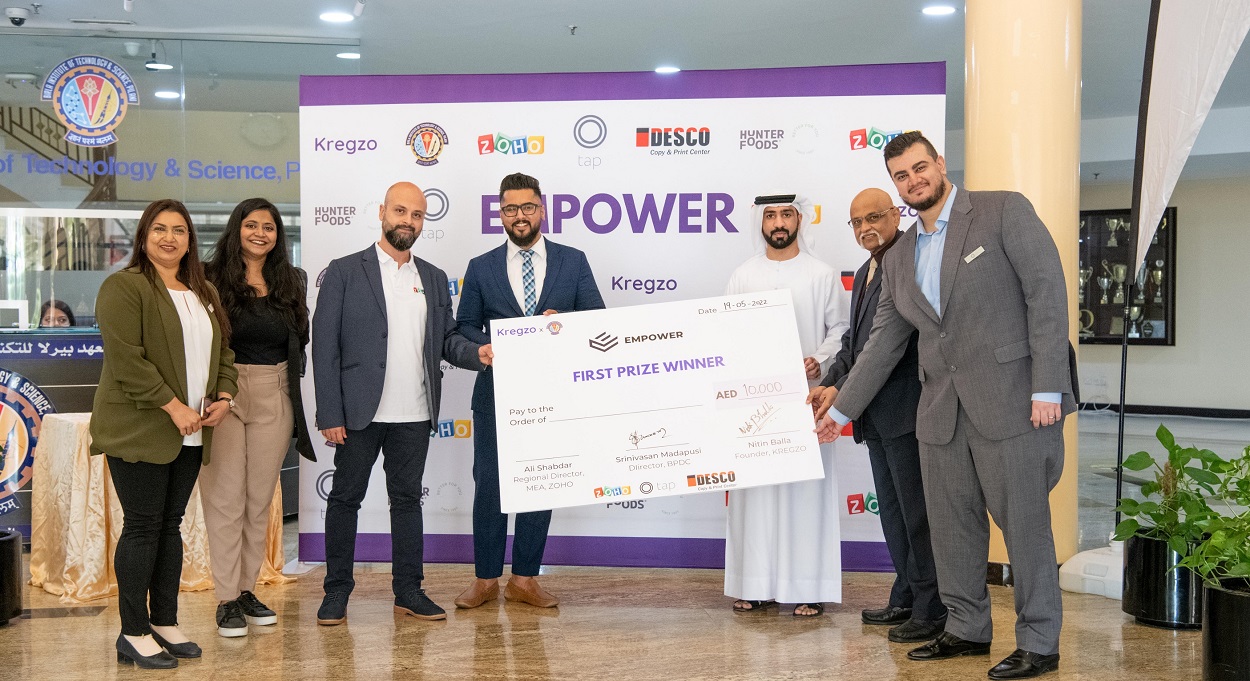 EMPOWER 2022 is the flagship event of Kregzo co-organized by BITS PIlani Dubai at the institute’s campus last week. The event saw 40 Universities, 100+ startup ideas and over 1000 students hustle and network under one umbrella event.
Top 20 Startups with combined potential investment of $100 million were shortlisted after the screening rounds to present at Empower.  The goal of the event is to bring the innovation in universities to the forefront & recognise the efforts of the student entrepreneurs.

Opening the event Chief Guest, Faisal Sajwani, Founding partner of Fate Capital & board member of The Private Office of  Sheikh Saqer Bin Mohammed Al Qasimi, said, “Don’t give up, keep moving forward – That’s the path to success. As students we may heel at the first sign of difficulty, don’t give in. Keep moving forward & you will see the results! This platform is built for all of you, get the best out it,  give the best efforts you can and move until you find success “

Dr. Srinivasan Madapusi, Director of the BITS PILANI Dubai Campus, commenting on the success of EMPOWER, said, “Younger generations are inherently entrepreneurial and risk takers, hence we at BITS Pilani encourage that our students grow in to this culture of trying new things and innovating. The goals of this event included a greater understanding of how to mold a business idea, expanding professional networks, fostering peer-to-peer relationships and gaining knowledge. I am immensely pleased to see our goals being achieved and EMPOWER being a platform enabling startups to scale up. I am grateful to all those who contributed in making this event a success and to all students and faculties who have put their best foot forward”.

The Pitchverse competition brought together the innovators from different universities in the UAE. Teams such as Unitors, Macrolabel, Appetit.me, Robosafe came from universities like SP Jain, Canadian University of Dubai, Heriot Watt & Emirates Academy of Hospitality Management amongst others.  After fierce 2 rounds, Relphacare, a social healthcare tracking platform that enables real-time communication with doctors, won the winning  prize of upto AED 10,000 as winners of Pitchverse.

Talking about the win, Nikitha Abigail, founder of Relphacare said  “The only way RelphaCare Technologies could have come alive in the way that it did, was through the collaboration among students on different campuses. We’ve got students on our team from universities like Amity, BITS Pilani, SP Jain, RIT and more. It’s great to see how innovation brings people together, forming communities   that solve one problem after another.”

The winning team itself is a testimony of how innovation can thrive when different players of the startup ecosystem come together as one.

Going forward these select 20 startups will be powered by Kregzo to receive one to one mentorship from best business leaders, resources, virtual incubation & access to resources worth $150,000 that a university level start up needs to scale up effectively.

Commenting on the same, Nitin Bhalla, CEO and Founder, Kregzo, said, “One of the main pillars of Kregzo is to bring together the different players of the startup ecosystem. The Empower event itself is proof that wonders can happen when people collaborate & build to solve problems with innovative solutions. This is just the first edition of EMPOWER that had to be held in my alma mater BITS Pilani, going forward, this event is scheduled to be 3 times bigger, thus allowing early stage entrepreneurs from all over the Middle East to collaborate & compete in the exclusive early stage entrepreneurial platform in the startup space that is Kregzo .”