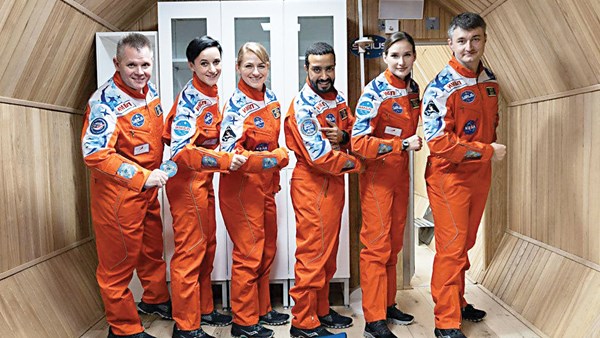 Saleh Al-Amiri, the first astronaut in space simulation, will complete his mission in the “Sirius 21” program on the fourth of July with the participation of 5 main astronauts from the US “NASA” agency and the Russian “Roskosmos”. ”At the Ground Experimental Complex at the Department of Medical and Biological Research at the Academy of Sciences Russian Sciences in the capital Moscow.
The 240-day mission is scheduled to end on July 4 next year with the participation of Oleg Blinov, Victoria Kirichenko and Ekaterina Krayakina of Russia, William Brown and Ashley Kowalsky of the United States and Saleh Al-Amiri of the United Arab Emirates.
Al-Amiri began the mission on November 4 last year, which lasted 8 months, conducting 71 research and experiments, including 5 Emirati experiments from 4 universities in the country, covering the areas of physiology, psychology and biology, and focusing on the effects of long-term exposure. for a simulated environment. Space on cardiovascular variability and cardiac interactions, as well as a study to determine the effects of stress-induced confinement and isolation on crew members’ circulatory and skeletal muscle functions during a task measurement of clinical, genomic, transcriptomic, and proteomic indicators.
Other selected topics for the mission included research into stress relief in isolation and confined environments, as well as research into the psychological challenges of isolation during human spaceflight: the role of motivational mechanisms and intermittent and intense training as a countermeasure to prevent bone loss and insulin resistance in space. as well as some common experiences. Provided by the Russian Institute, the American space agency “NASA” and some of the most prestigious universities in the world, such as Oxford University and others.
During the mission, Al-Amiri conducted a series of scientific experiments, such as simulating the operation of a space robot, reducing stress in isolation, as well as virtual reality experiments, including launching a vehicle and securing its docking with the International Space Station. over the moon and Mars and perform an electroencephalogram experiment; In order to get a clear picture of brain function in isolation mode, which helps researchers identify brain interaction and changes in cognitive function when staying in isolated environments for extended periods of time.
Al-Amri also performed several experiments, including a study of the samples he collected with his colleagues, during a simulation experiment with landing on the moon’s surface and a successful simulation of landing on the moon’s surface for 5 days, as well as the experiment of evaluating the cooperation between crew members and a simulation experience of, among other things, walking missions on the moon’s surface.

Scientific goals
The scientific objectives of the mission include performing tests on available experimental instruments, preparing to work aboard the International Space Station in isolated conditions inside a sealed body, with the crew working in a sealed body simulating a spacecraft, and creating a integrated database of scientific data obtained during the implementation of the Project, testing of mechanisms for the creation and operation of international cooperation teams responsible for identifying and solving scientific problems for future lunar missions, in addition to evaluating the effectiveness of the isolation model compared to a real space mission.
The “Sirius 21” mission is of great importance for understanding the effects of isolation on the psychological and physiological aspects of humans and the mechanisms of the team’s work, to support the preparation for space exploration missions that take long periods, and the ground simulation unit includes unique facilities to perform typical space flight studies according to a time period and different complexity. The backup crew includes Abdullah Al Hammadi, from the UAE, Vera Bekhtereva, Evgeny Prokubiev and Alexei Federov from Russia, and Brian Evarts and Tatiana Delaney from the United States, who work as a reserve crew for the project, in addition to supporting the project’s core crew from the operations center.