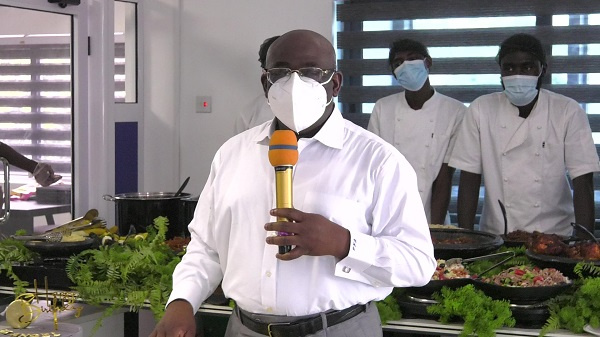 The Managing Director of the Ignite Media Group, Mr. Edward Ato Sarpong, has recalled his journey to success and the bold decision that transformed his life.

At age fifteen, Mr. Sarpong said, he discovered the environment in the Adisadel Village in Cape Coast, where he resided and could truncate his aspirations and goals in life, therefore, had to migrate to the capital city.

He confided in a friend and he lent him some money for transportation to Accra to begin a new life and pursue his dreams.

Telling the chilling story during his surprise 52nd birthday celebration party organised by his wife, Mrs. Joyce Sarpong, at his North Ridge office on Monday, March 29, 2021, the former Deputy Minister of Communications said relocating to the capital city has transformed his life though he was naïve when he embarked on the journey.

“My life has been moving from one beautiful chapter to another. I don’t call them challenges. I think that it is a chapter in our life, so, thirty-nine (39) years ago when I was just about thirteen years old or so, I left Adisadel Village, Cape Coast where I lived, borrowed some money from a friend then journeyed to Accra. And, that was a decision that has transformed my life,” Ato Sarpong said at the ceremony attended by clergymen, friends, and employees.

He narrated, “At age 14-15, I made a decision that the environment I was living in was not the right environment, so, I needed to get out from there. That was all I knew”.

The erstwhile President of the Ghana Internet Service Providers Associations (GISPA) attributed his success to the almighty God and his better half stating that she’s being the pillar of his life and a dependable life partner.

“We thank God for his mercies and we also thank God for when I got to Accra, I met a woman whom I’m married to. When I’m out there messing up; creating the mess, confusion, and doing things that are abnormal; She’d go on her knees in the middle of the night praying for me wherever I am, so, it is the covering of the prayer of my wife that has taken me through challenges and troubles. And, each time there’s a challenge coming I just smile at it because I know that, if I mess up someone down there will kneel and pray and I will get out of it. She’s my prayer warrior, so, I’m very grateful to her for being that pillar for over so many years,” he complimented.

Ato Sarpong has for the past two decades served as a business leader in telecommunications, broadcasting, finance, and general management.

He was very instrumental in corporate re-engineering of several organizations including British Airways, Greenview Limited, and Cape-Coast Quarry.

The alumnus of the Manchester Business School Leadership Development Programme played a major role in shaping a number of businesses, including TV3 [where he served as a Business Consultant and Director of Commercial and Operations].

He also worked as a Business Consultant to the Multimedia Group Limited between 2012 and 2014, where he helped shape internal structures, guided strategic initiatives and led the company’s international expansion into Nigeria, Liberia, and Sierra Leone.