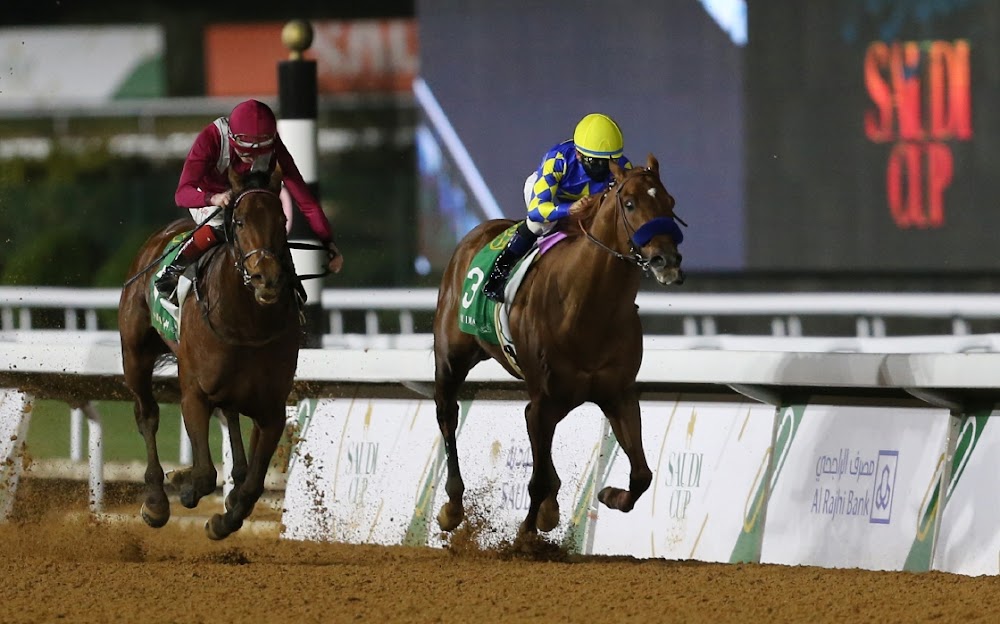 The betting market had the world’s richest race — the $20m Saudi Cup — as a two-horse US affair, but top British trainer John Gosden spoiled the party with his four-year-old Mishriff.

With the US horses Charlatan and Knicks Go dominating proceedings for much of the race, all was going to plan until the final 200m when 21-year-old David Egan unleashed his challenge on Mishriff to win by a length.

The big question now is whether his connections will elect to travel 1,000km and take in the $12m Dubai World Cup on March 27. If Mishriff runs he could earn a staggering $16m in the space of four weeks.

Egan is the rider for owner Prince Faisal which is why the Gosden runner was not partnered by the stable’s usual jockey, Frankie Dettori.

With his rider’s cut of the $10m first prize won by Prince Faisal, it was a huge payday for young Egan and he was understandably over the moon with the win.

“It’s unbelievable — I’ve been waiting all my life to ride a horse in a race like this. It’s a privilege to be connected with such a class horse,” said Egan. “I didn’t expect he was going to be able to travel so well behind the leaders. It took him a little while to get going, but then he ran them home.

“He’s matured throughout the year and Mr Gosden had him primed for today. He looked a million dollars  — well, 10-million!”

Mishriff, a son of Make Believe who stands at stud in Ireland at a fee of €15,000, had proved he is a top performer by winning the 2020 French Derby, but Gosden, who did not fly out for the race, worried whether his charge would handle the dirt surface at King Abdulaziz racecourse.

Speaking from his Newmarket base via zoom after the race, Gosden said: “I think there are very few horses that can switch surfaces like that. I have always been told by the top American jockeys and Frankie Dettori that this is the best dirt sand track in the world and I think that is very much proven today.

“So many of the tracks are too loose with horrible kickback, but this is a very good test for a thoroughbred,” said Gosden.

Bob Baffert, trainer of the runner-up Charlatan, also did not make the trip to Saudi Arabia but said his raider ran creditably. “I was very proud of his effort. Going in, we said he would run his race. Turning for home, we knew they were going pretty fast early. He’s a fast horse but that stretch — I’m glad we don’t have any stretches like that in America.”

Charlatan’s jockey Mike Smith said: “He’s just so lightly raced this year and the way the racetrack was playing all day, I got a little concerned because speed wasn’t holding all day long. He’s only run once this season and he got really tired. If he’d had two races, I think he’d have won.”

Mishriff was quoted at 7-1 in ante-post betting for much of last week so the horse’s SA supporters got an unexpected surprise when the Gosden horse paid R20.80 for a win on the tote. If Dettori had been in the saddle, the dividend is certain to have been much lower.

SA owners can only have viewed the action in Saudi Arabia with envy. Every one of the eight races carried a large purse. In contrast, the main event at Turffontein last Saturday — the Egoli Mile — carried a gross stake of R95,000 (about $7,000).

One jockey who will want to forget the 2021 Saudi Cup in a hurry is Italian-born rider Umberto Rispoli, who was due to partner Max Player. Rispoli was buckled in for his flight to Riyadh when he was told to disembark due to Covid-19 restrictions. His test for the virus would have expired on his arrival.

“I’m so devastated and frustrated, but it was out of my hands. I want to give my sincere apologies to trainer Cash Asmussen and the connections of Max Player,” Rispoli said.