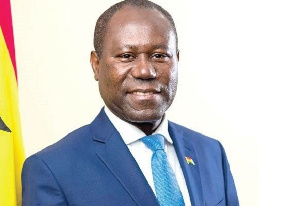 Cocoa production in Ghana is expected to reach 800,000 tonnes this season, according to COCOBOD’s forecast. This is significantly higher than the trough of about 700,000 tonnes per annum around the middle of the previous decade but well below the peak production level of one million tonnes achieved a decade and a half ago.

The forecast production for the current crop season, if achieved would bear testimony to the prudence of COCOBOD’s ongoing strategy of focusing on increasing productivity in the best quality acreages under production rather than trying to increase output everywhere including the least productive third of cocoa farmland under cultivation, which is producing sharply diminishing output. It also evidences the success of the industry facilitator’s mass hand pollination initiative introduced a couple of years ago to supplement its mass pesticide spraying exercise.

However while production is increasing, a commensurate increase in actual sales is proving harder to achieve as global demand has slumped due to faltering demand for chocolate in the face of COVID-19 – instigated economic slowdown. Added to this, are problems created by the efforts of some major chocolate producers to evade paying the US$400 per tonne Living Income Differential (LID) demanded by Ghana and Cote d’Ivoire who between them account for over 60 percent of global cocoa production. While all the major chocolate makers publicly declare their support for LID which aims to improve the incomes of rural farmers in both countries, several of them have resorted to underhand tactics to avoid paying the agreed price premium.

Sluggish demand for raw cocoa beans is making COCOBOD’s efforts to increase the proportion of Ghana’s production that is subsequently processed locally, all the more important.

The Ghana Cocoa Board (COCOBOD) is on track to meet the 50 per cent local processing target of cocoa beans produced in the country, the Chief Executive Officer, Joseph Boahen Aidoo, has said.

He said the country was currently processing about 40 per cent of cocoa beans locally and was, therefore, confident of meeting the 50 per cent target soon.

Mr Aidoo claims that this year’s edition of the annual National Chocolate Week, held annually to raise awareness of the need to consume Ghanaian chocolate products, leveraging on the spike in demand for and consumption of chocolate generated by the commemoration of St Valentine’s Day on February 14, was part of the wider drive by COCOBOD to promote the local processing of cocoa to boost the consumption of products derived from it.

Importantly, he says the Board is looking at expanding the incentives offered to support local processing of cocoa.

“The incentives will ensure that the processors are able to access more beans and produce more chocolate and other cocoa products for the consuming public” he asserts.

In 2017 the government unveiled an ambitious plan to increase cocoa production to one million tonnes per annum – up from the current level of between 700,000 and 800,000 tonnes a year – while increasing local processing of the beans to 50 percent of total production.

This has been achieved already as country now has seven major cocoa processing firms with cumulative processing capacity of about 500,000 mt. This is set to improve further as construction is currently ongoing of a new 50,000 capacity processing factory in the Western Region.

However, a major proportion of this processing capacity only adds limited value to the raw beans, turning it into cocoa paste for instance. This and other intermediate cocoa derivatives are used as inputs for chocolate makers, and most of it is thus utilized in this way by foreign firms. At the end of the cocoa value chain is chocolate itself, a product which generates some US$110 billion in annual sales which is about 50 times Ghana’s annual raw cocoa beans export revenues (2020: US$2.3 billion) despite the fact that Ghana produces more than a quarter of the world’s entire cocoa beans production. Despite the temporary slump in demand triggered by COVID 19 the chocolate market can be expected to grow even bigger over the next few years; the global market is projected to surpass US$161.56 billion in revenues generated by 2024, growing at a Compound Annual Growth Rate (CAGR) of around 7.0 percent in terms of volume.

Officials of the Ghana Export Promotion Authority (GEPA) have been holding stakeholder discussions with representatives of COCOBOD and key industry players in the cocoa sector to institute policy frameworks that will lead to increasing the quantity of cocoa beans sold to chocolate manufacturing companies to enhance Ghana’s competitiveness and market share in the export of chocolate in the global market.

Already major strides have been taken in this direction; at the time government announced its 50 percent local processing target the quantity of cocoa beans COCOBOD was selling to local processors during the major and minor crop seasons was less than 30 percent of the country’s annual crop production.

One major challenge faced so far in this regard is that most chocolate companies prefer buying the cocoa beans during the minor crop season as against the main season. This is because the minor season crop beans are sold at a certain discounted price which also comes with other additional benefits to the companies with the result that a number of such companies buy less of the cocoa beans during the main crop season.

“There is an international price for the cocoa beans as against what the companies here want to pay. Cocobod would not want to sell at a discounted price during the main crop season to the local companies as against what export of the raw cocoa beans will give them”, Mr. Erasmus Ashun, Director of Product Development of GEPA explains.

But with the 50 percent local processing target now being met COCOBOD may have to decide whether it can afford to forgo some revenue by selling part of its main crop harvest to local processors at a discount with an eye on the bigger picture in terms of more value added for the nation ultimately.

But this is not the only challenge. The Head of Services and Manufacturers of GEPA, Mr. Bandah Abdallah notes that the problems facing Ghana’s chocolate industry are multifaceted as there are also challenges in terms of lack of both economies of scale and financial muscle which are needed to increase chocolate production for export. For instance while there are several artisanal chocolate producers in Ghana they lack the production capacity and market demand to compete with major international producers with regards to unit cost of production and this makes them price uncompetitive.

On the other hand, though there is an increasing awareness both in local and foreign consumer markets that Ghanaian chocolate is of premium quality, because of its higher actual cocoa content compared with foreign chocolates that are relatively laden with sweeteners and so they are willing to pay premium prices. Ghana’s leading chocolate maker, Cocoa Products Company evidences the potentials of Ghanaian enterprises that enjoy even limited economies of scale and market savvy – its latest line of up-market products are doing well both at home and abroad.

Here the company is adjusting its product lines to exploit identified global trends in chocolate consumption. The changing preferences of consumers is a key factor that persuades companies to focus on product development and marketing tactics to expand into a wider consumer base and capture new markets. This is driving the growth of the global market for chocolate. Different types of chocolates are produced worldwide and they include dark, milk, and white chocolate.

Importantly, US$200 million, out of the US$700 million medium-term syndicated loan procured by COCOBOD from a consortium of lenders led by African Development Bank is being used to support local processors.

Africa produces about 75 percent of the total global cocoa production, yet it has only five percent of the entire chocolate market whereas Switzerland and Belgium – the world’s top two producers of chocolate – reportedly earn around US$14 billion and US$12 billion respectively from the export of chocolate annually.

The changing preferences of consumers is a key factor that persuades companies to focus on product development and marketing tactics to expand into a wider consumer base and capture new markets. This is driving the growth of the global market for chocolate. Different types of chocolates are produced worldwide and they include dark, milk, and white chocolate.