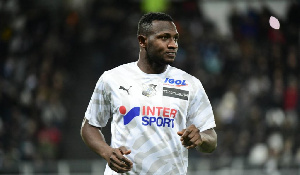 Ghana defender Nicholas Opoku is set to miss the Nations Cup next year after suffering a serious injury.

The center-back returned to Amiens SC for preseason after Ghana’s international friendlies against Morocco and Ivory Coast.

However, the player was diagnosed of a knee problem which will rule him out for several months.

Opoku will undergo a scan to determine the extent of the injury but kit is likely he will be out till February ruling him out of the Africa Cup of Nations in January next year.

Opoku picked up an injury whiles playing for Amiens in the Ligue II against Rodez last season, but returned to fitness before the end of the campaign.

He was then named in Ghana’s squad for the international friendlies against Morocco and Ivory Coast.

He picked a knock in the match against the Atlas Lions in Rabat and failed to recover for the Ivory Coast match.

This is a big blow for the French club and the Black Stars as the former Club Africain player has become a regular for the two teams.

He scored his first goal for the Black Stars of Ghana in the AFCON qualifier against Sao Tome in March.

Previous articleUAE weather: fair and dusty with some cloud
Next articleDid the pandemic create a baby boom in the UAE that we expected?