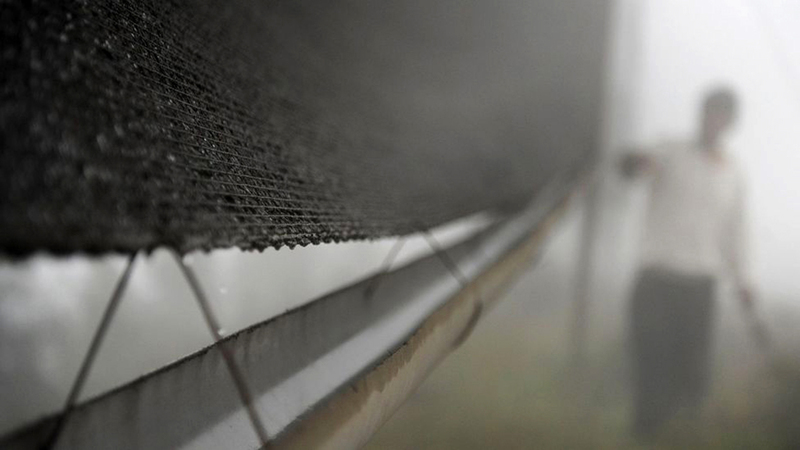 The Dar Si Hammad Association for Development, Education and Culture, and its German partner, the Water Foundation, have proven that fog can be a reliable and valid water source in the presence of a state-of-the-art project. The two parties built the largest fog collection facility in the world, including 1,700 square meters of Moisture-retaining nets made drinking water available for 16 villages in the Anti-Atlas Mountains region, southwest Morocco.

The women, who are usually responsible for fetching water, were able to save 3.5 hours a day that they used to spend fetching water, which led to an increase in the rate of girls’ enrollment in schools, and an improvement in the quality of life in those villages in general, and the project contributed to leaving a profound impact on various levels. in that region.

The “Fog Harvest” project relies on an innovative idea, which is extracting water from fog in the mountaintops, by intercepting it with networks designed for this, and providing residents of areas with severe shortages of water after collecting and treating it.

The “Dar Si Hammad” association has worked on this project in the “Sidi Ifni” region in southern Morocco for more than 10 years, in partnership with a German institution.

The project qualified for the “Expo Live” program of “Expo 2020 Dubai”, and its basic principle is to develop qualitative and innovative ways to adapt to climate change, with special attention to the issue of gender.

Women in particular spend a long time on the way to fetch water, knowing that the water from the wells themselves is becoming increasingly scarce, due to the lack of rain (less than 112 mm annually), which made water a major concern for survival, especially in the dry season, whether for humans or livestock or the environment in general.

The association’s team began the studies and experiments necessary for the project since 2006, and the result was about 10.5 liters of drinking water per square meter of the network that intercepts the fog at a height of up to 1225 meters above sea level at the top of Mount Botmezgida, and this result encouraged them to develop The project is more and more.

The Foundation says that with water delivered to homes, the impact of this can be measured with fixed indicators, including the local community, noting that the fog itself has become a sustainable resource, thanks to its research and development.

The project won the United Nations Climate Change Prize in 2016.

The nets of the “Fog Harvest” project were set up along mountainous terrain in the southwest of Morocco. This space is on the borders of the Sahara, 35 km in a direct line from the Atlantic Ocean. region, but its intensity increased since the eighties of the last century.

The dry desert wind also blows over the area, making it drier, but this site receives dense and frequent fog during 143 days of the year, and it is this fog that is harvested by “Dar Si Hammad”, and turns it into drinking water, to be delivered to the residents.

From June 2011 to June 2014, 600 square meters of nets were built on the top of the mountain, and in March 2015, the official inauguration of the project took place, in addition to a series of infrastructures built in the area, including pipes and tanks, so that the water reaches the families in a regular manner. permanent.

As for the quality of the transported water, it is checked at regular intervals.

The advantages of this technology are that it is environmentally friendly and preserves the groundwater level in the region, and the association seeks to generalize the experience to the largest number of villages during the coming period.

The association says that it has obtained the new generation of “Cloudfishers” nets, with better performance than the old fog sensors, and they require less maintenance, because the networks are supported by a solid plastic structure, and withstand winds of up to 120 kilometers per hour, noting that the research The development prompted it to establish a center dedicated to reforestation and the study of animals and plants with the aim of preserving their existence, with the participation of members of civil society and researchers.

Fog harvesting is one of the alternative ways to save water, and it is based on modern techniques that enable the collection of water from fog when the appropriate conditions are available for condensation in a mass of water vapor above the surface of the earth at varying heights, and this feature can be exploited to provide an alternative source of water in regions This idea has been used successfully years ago in the mountainous and coastal regions of Chile, Ecuador, Mexico and Peru.

Water shortage in the desert of Morocco.

Technology to extract water from fog.

Jamila Barkash, from the Dar Si Hammad Association for Development, Education and Culture, told the “Expo Live” program that “the association is currently running the largest project in the world to collect fog, in order to obtain water, and it serves 119 homes, in the Atlas Mountains in southwest Morocco, and we seek To provide more people with safe drinking water, and for fog to become a sustainable resource that provides water when needed.”