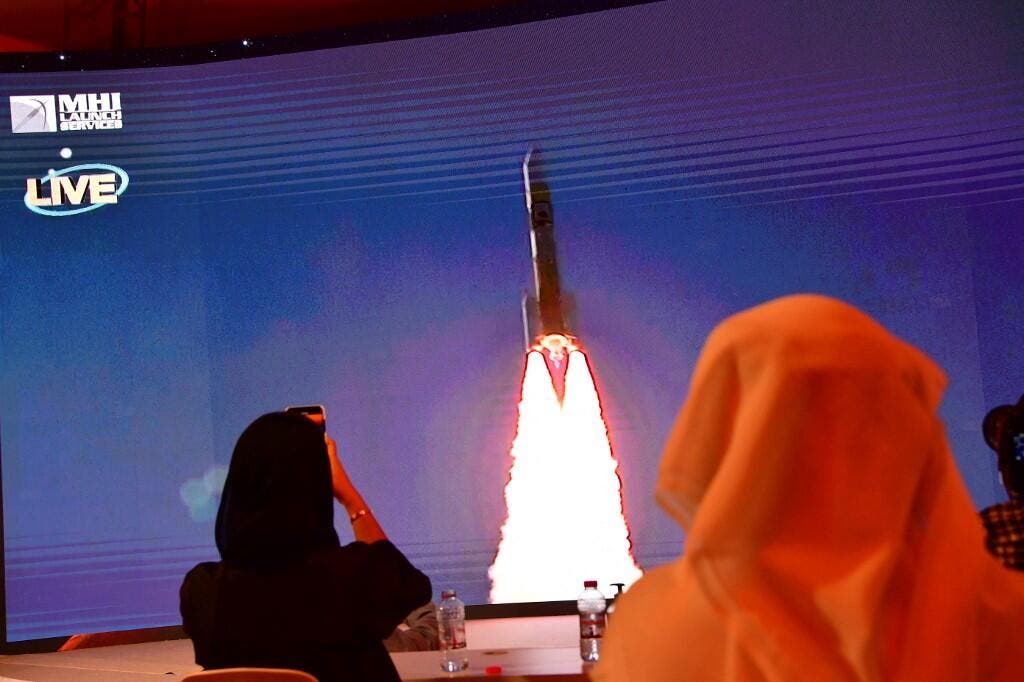 Three robotic explorers launched by three different nations are due to reach Mars within days of each other, after hurtling hundreds of millions of miles through space.

NASA’s rover, Perseverance, will arrive a week later, on February 18, to collect rocks for return to Earth – a key step in determining whether life ever existed on Mars.

The $3 billion Perseverance mission is the first leg in a US-European effort to bring Mars samples to Earth in the next decade.

Hope, Tianwen-1 and Perseverance all launched within 12 days of each other in the second half of July last year.

The UAE, China and the US took advantage of a period last July when Mars and Earth were favourably aligned to launch their exploratory missions to the Red Planet.

Hope, which was the first of the three to launch, on July 19 from Japan’s Tanegashima Space Center, will not land on the Martian surface but take readings from the Red Planet’s atmosphere.

It will help answer key questions about the Martian atmosphere and the loss of hydrogen and oxygen gases into space over the span of one Martian year or nearly two Earth years.

Called Amal, or Hope in Arabic, the Gulf nation’s spacecraft is seeking an especially high orbit – 13,500 by 27,000 miles high – to monitor Martian weather.

‘We are quite excited as engineers and scientists, at the same time quite stressed and happy, worried, scared,’ said Omran Sharaf, project manager for the UAE, in anticipation of the first of the three scheduled arrivals.

Six spacecraft currently are operating around Mars – three from the US, two from Europe and one from India. The UAE hopes to make it seven with its mission.

Meanwhile, China’s craft, which consists of an orbiter, lander and rover, measures just over six feet in height (1.85m) and weighs 530 pounds (240kg).

Emirates Mars Mission ‘Hope Probe,’ the first Arab interplanetary mission, will be the first probe to provide a complete picture of the Martian atmosphere and its layers when it reaches the red planet’s orbit. Witness the historical event on February 9. pic.twitter.com/P5GIcJ1yTY

Called Tianwen-1, or ‘Quest for Heavenly Truth’, it is due to enter Mars orbit on Wednesday, February 10, but it will remain paired in orbit until May, when the rover separates to descend to the surface.

Once the rover gets to Mars, it will survey the composition, types of substance, geological structure and meteorological environment of the Martian surface, and look for signs of alien life.

If all goes well, Tianwen-1 will make China only the second country to land successfully on the Red Planet.

Both the UAE and China are newcomers to Mars, where more than half of Earth’s emissaries have failed.

This is not China’s first attempt at Mars – in 2011, a Chinese orbiter accompanying a Russian mission was lost when the spacecraft failed to get out of Earth’s orbit after launching from Kazakhstan, eventually burning up in the atmosphere.

Lastly, Perseverance, which was the last of the three to blast off last July, will land on the Martian surface on February 18.

The one-ton Perseverance rover is larger and more elaborate than Tianwen-1’s rover, but it will similarly prowl for signs of ancient microscopic life.

‘To say we’re pumped about it, well that would be a huge understatement,’ said Lori Glaze, NASA’s planetary science director.

About the size of an SUV, the rover will dive in straight away for a harrowing sky-crane touchdown at the 30-mile-diameter Jezero Crater – an ancient river delta that seems a logical spot for somewhere that once harboured life.

This landing zone in Jezero Crater is so treacherous that NASA cancelled it for Curiosity, but so tantalising that scientists are keen to get hold of its rocks.

‘When the scientists take a look at a site like Jezero Crater, they see the promise, right?’ said Al Chen, who is in charge of the entry, descent and landing team at NASA’s Jet Propulsion Laboratory in Pasadena, California.

‘When I look at Jezero, I see danger. There’s danger everywhere.’

With an 11-and-a-half-minute communication lag each way, the rover will be on its own, unable to rely on flight controllers.

The odds are in NASA’s favour, however, as it has nailed eight of its nine attempted Mars landings.

Once landed, the six-wheeled Perseverance will drive across Jezero, collecting core samples of the most enticing rocks and gravel.

Perseverance is carrying seven instruments that will analyse samples from the surface, including an advanced panoramic camera, a ground-penetrating radar and an X-ray fluorescence spectrometer for analysis of chemical elements.

The NASA rover, which launched from Florida on July 30, will set the samples aside for retrieval by a fetch rover launching in 2026.

Under an elaborate multi-billion plan still being worked out by NASA and the European Space Agency, the geologic treasure would arrive on Earth in the early 2030s.

Scientists contend it is the only way to ascertain whether life flourished on a wet, watery Mars three billion to four billion years ago.

NASA’s science mission chief, Thomas Zurbuchen, considers it ‘one of the hardest things ever done by humanity and certainly in space science’.